Applaud Progress (It's Not All or Nothing) 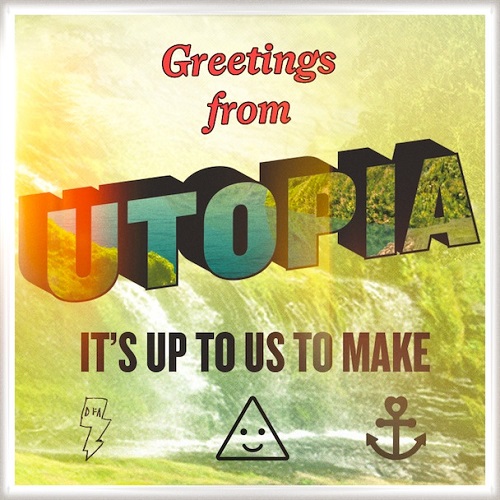 Back when I was looking at potential colleges, and getting frustrated by all the pros and cons of each, my Dad kept saying to me, "There is no utopia Lindsay. No school is going to have everything you want, exactly the way you want it. You have to find a school that has most of the things you're looking for and make the best of it."

I was convinced if I just looked a little harder, I'd find this perfect school. I'd find a school that was built just for me. The University of Lindsay was somewhere, right?

Eventually, as the deadline to enroll quickly approached, I came to finally accept that there were a lot of schools that were perfect for me, even if they weren't my perfect school.

I decided it was my job to find the best option, not the perfect one.

Looking back, I don't think I could have made a better decision and I would probably make the same one all over again. Funny thing, after my first semester, I decided my college wasn't the right school or best choice for me and actually left after my Freshman year. A semester elsewhere made me realize how much I actually did like it there, and how it actually was the right choice, and so by the Spring of my sophomore year, I was once again enrolled in my not-perfect-but-best-choice school I started at.

BUT this blog post isn't about me and my inability to commit to things, and the fact that I always have ants in my pants :)

It's about applauding progress and accepting that we don't have to live in an "all or nothing," "black or white" world.

My college story rings to this: It's not about seeking out utopia.

Recently, I posted on Facebook how TCBY had teamed up with Silk to provide the first-ever dairy-free frozen yogurt. 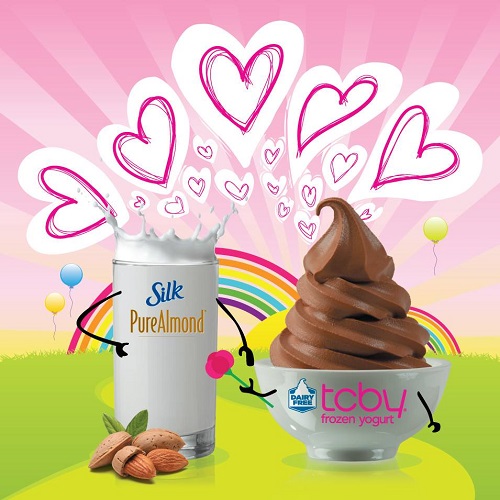 While many people were as excited as I was, there were some not-so-happy comments.

Some people commented on how it's still "crap" because TCBY is using sugar or stabilizers or conventional ingredients. Others commented on how Silk (who is non-GMO) is owned by a larger parent company that has GMO products and so forth.

I don't discount or deny any of these statements as true and worthy of our concern. For me, though (and this is just my humble opinion), I think it's pretty amazing that a national chain is taking the initiative to create a dairy-free froyo.

This is a sign that times are finally changing, or at the very least, that we are getting a louder voice as consumers. Big corps are taking note and providing alternative options.

I personally feel that whenever a company makes an attempt like this, we should shower them with praises. We should support their efforts, even if they are not ideal.

I say, give TCBY a thumbs up. Then, after this product is successful, we ask for an even better option — the organic, sugar-free, vegan, etc. "utopia" option.

And hopefully, with TCBY's success, TCBY's competitors will take notice and provide their own delicious dairy-free/vegan option. How amazing would that be?

My resolve? I recommended the place to everyone I knew — especially my vegan friends. I even thanked the owner personally as well both of the store managers. I left a happy comment in the suggestion box, too. Twice.

Anyway, one of the managers said something to me that just burned. He told me they'd started selling vegan cheese in hopes to accommodate everyone but that it was "backfiring." Specifically, he told me that a few local vegans had blogged negatively (and left equally bad reviews) about their restaurant because they weren't using the more popular brand of vegan cheese, and because they also had been slow to adopt vegan cheese (noting that a national chain establishment in the area already had vegan cheeseandthe popular brand.) None of this was untrue, but broke my heart.

I could tell if it was up to the manager, he'd have just nixed it from the menu. "Why bother?" he said.

Yes, we have growing power as consumers and I'll be the first to say "you're paying for a custom meal, it's okay to let them earn it" but I think (and this is just my opinion again) that it would be better to say, "Hey! Thanks for having vegan cheese. Did you know that [this other brand] is more popular and delicious? Could you get that instead?" rather than go home and leave bad reviews and mean-spirited comments telling people not to go there because they are "behind the times" and "don't have the good cheese."

(I've seen this happen in other circles too. It's not just "vegans" who do it.)

So with TCBY, while it's still not *my* ideal ice cream and I probably won't eat it (I don't really like chocolate ice cream anyway, to be fair), I'm still going to send TCBY (and Silk) thank you emails showing my appreciation that they are providing a dairy-free fro-yo option.

AND maybe in a month, when their new flavor is a rockstar success, I'll ask for a whole foods vegan vanilla flavor :P 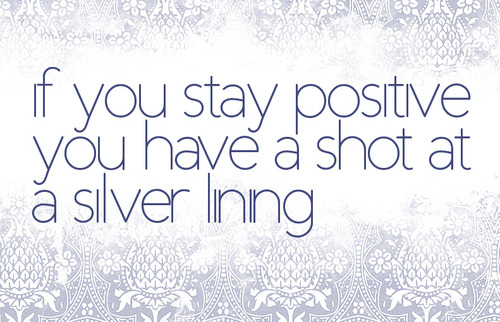 Even when I don't get exactly what I want, I look to see if there is a way I can move myself in that direction for the future.(Thanks Dad!)

I can also (sadly) think of at least five other situations a lot like these.

For example, about this time last year I did a food demo on a farm in upstate New York with Engine 2 & Forks Over Knives' Farms2Forks event. The only place to buy anything for 30+ miles was Walmart, so the conference coordinator bought all my demo ingredients at Walmart.

Admittedly, I don't love Walmart, but I put my personal feelings aside and focused on the good news: That if someone *had* to shop at Walmart (because they lived in a rural area and that was the only option; OR it was all they could afford) they can still eat plant-based meals. Hooray! I am glad that this diet and lifestyle is truly available to anyone.

Yet when I posted pictures of this demo, with the Walmart veggies, a heated debate and fight broke out on my Facebook page. I was called all sorts of nasty names for "supporting Walmart," even though I technically didn't (those supplies were given to me) — but still.

You have to do the best you can.

Applaud progress. It's not all or nothing.It's about do the best you can within the limits of your circumstances. We live in an imperfect world.

One final example: A few years ago a certain company acquiesced to consumer demands and changed one of their practices.

Yet even after they changed, many consumers continued to rage on and encourage still more boycotts because the company "only changed because of their bottom line" and not because they had a change of heart and decided the practice was immoral.

I too would have preferred the company grow some morals, but at least they did what we asked. At least they changed. Doesn't that change count for something?

Shouldn't we also feel good about our voice? That we were able to get the change we asked for? Even if it wasn't perfect in every way?

I worry what kind of message we give if we're impossible to please.

I worry what kind of message we send if someone changes and does what we ask, and then we still rage against them anyway. Why, then, would any company be motivated to listen or change in the first place? Why bother indeed.

I'm not saying we have to compromise ourselves, or what we believe in.

I am a big believer in "good enough" isn't "good enough" for me... but I stop to smell the roses and champion change and progress that's headed in the right direction. 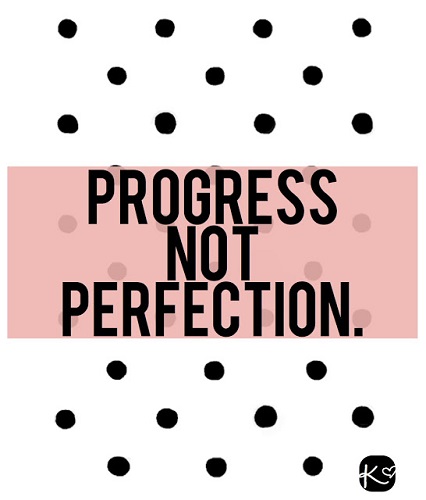 I stop for a minute and say thank you.If I want the blue pants in a size 6, but the sales girl brings me the last pair that's a size 8, I say, "Thanks for trying," not "Forget it! I'll spend my money elsewhere!"

A little bit of love and encouragement goes a long, long way... especially when someone is trying to accommodate you.

At least, that's been my experience.

We can still encourage more. We can still lobby, but isn't something better than nothing?

I love that saying, "we may have lost the battle, but not the war" and "do not lose sight of the forest for the trees" (or something like that, I'm always jumbling up my idioms). While neither really applies here directly, the overall picture behind them does. 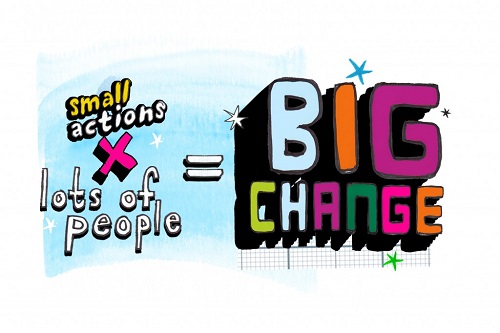 It’s wonderful that you care, but don’t let your caring also make you angry.

We want change. We deserve change. and so we have to continue to encourage the change we see, even if it's not the exact, perfect utopia change.

Let's work toward that. Not against it.

I want utopia, but I also know we're not going to go from 0 to utopia overnight, and training wheels and baby steps might be necessary.

I wish every restaurant I wanted to go to had sexy, plant-based, oil-free, sugar-free, organic options, and many of them! I want a whole menu for ME! But for now, I'm just happy to find something to eat at all. And even when the option is kinda lame, I still tip well and thank the manager for having the option.

Someday we will live in a better world, but first we must build it.

"Be the change you wish to see in the world." — Ghandi 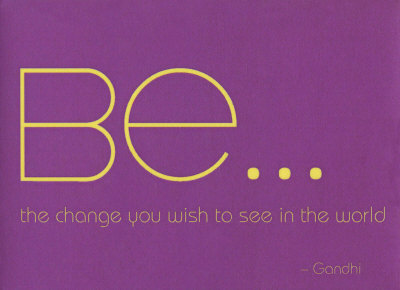 Minimalist Monday: It's About Doing the Best You Can