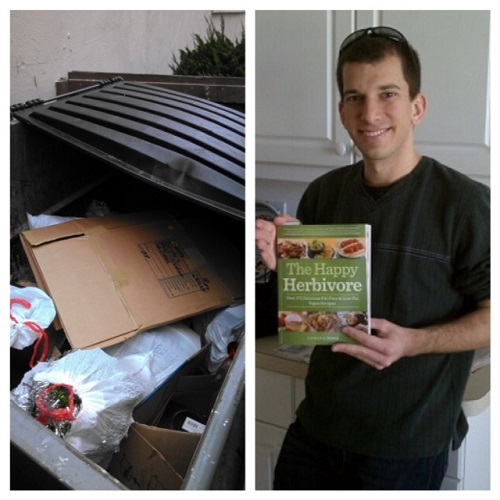 You know how I'm always saying lead by example? It's because it works. Living your lifestyle and thriving is the best testament and sales pitch there is. I'm never quick to pitch or push my lifestyle on others, but because I love it so much and am so happy and thriving, it starts to rub off. 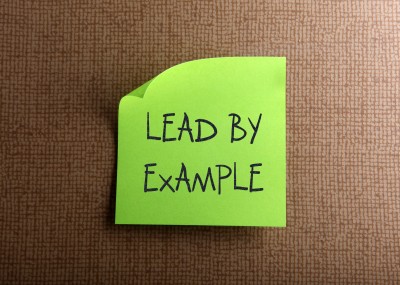 Recently, I was out to dinner with a mixed group of friends and one friend, an omnivore, ordered one of the vegan options on the menu. Another friend said, "oh has Lindsay gotten to you? Are you a vegan now?" and the friend smiled, looked at me, and said, "well, now that you mention it, since becoming friends with Lindsay and Scott I do seem to eat more vegan meals, but I ordered the vegan wrap because it's just so good." I love that!

Lately it seems my minimalism has been rubbing off on my friends, too.I love the random text message that's just a picture of a cleaned out garage, closet, etc. No words are necessary. We know what's going on ;)

For years I've tried to rub my minimalism off on him (he'll tell you about that) and I guess I finally have ;)

Jim documented his recent purge and downsize (I couldn't be more proud!) but what I love most is his honesty — and his reflection on how he ended up with so much stuff, and the realization that he could (and wanted) to live with less. 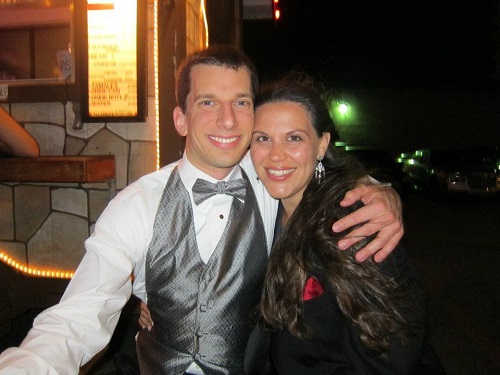 "Before last Saturday, I don't remember the last time I let Lindsay see inside my closet. I doubt I ever did. I can still hear her reaction: “Oh my God, Jim.” Suffice it to say, minimalism is a work in progress.

I didn't always have this much stuff.When I left for college, everything I needed fit in a single carload, with three people including myself. Moving between dorm rooms after freshman year took several carloads, but I assumed that was simply because I didn't pack as efficiently. Things kind of grew from there.

By the time I left the East Coast, I had more than enough belongings to fill a one-bedroom condo. Granted, I didn't really believe I had a problem.As time goes on, we naturally acquire more belongings, right? And the vast majority wasn't junkper se. It all had some utility, given the right place and time.

But there was a problem.Most of the time, I didn't know what to dowith it all. It got to the point where one female friend actually gave me plastic bins to stow away the clutter and encouraged me to buy more. When Lindsay would come visit, I cleaned up as best I could to avoid making her nervous. I would try to excuse what remained:“I cleaned up as best I could. You should have seen this place several hours ago!”

When I moved to a smaller one-bedroom in California, I started to realize I had a problem. For one thing, I had a hard time finding places to put all my stuff. When I began reading the Happy Herbivore Minimalist Monday series (and seeing the Happy Herbivore homestead firsthand),I started realizing how freeing it could be to live without so much baggage.

I made a rather momentous decision: I knew I worked long hours and was often out when not working. I rarely used most of these items (some of which languished for over a year in boxes). Therefore, I decided to move into a studio. If I was rarely home, why did I need all that space? Compressing into a smaller apartment would allow me to live where I wanted. And furthermore, that smaller space would forceme to eliminate many of my belongings. It wouldn't be easy, but I was willing to take on the challenge.

First, I needed to move, so I started with the bare necessities. Then came the furniture (almost all of which fit!). I felt relieved and comfortable in my new place. It was so clean, and I had everything I needed. So what was all that stuff still lying around in my old apartment?

Stepping foot into my old place, I felt as if I might be washed away by the flood of stress. So much clutter and disorganization — how much of this did I really need? Some things I knew were just plain junk, or too old and dilapidated to be of any use. I filled a dumpster about a third of the way with that and donated a carload of old books. 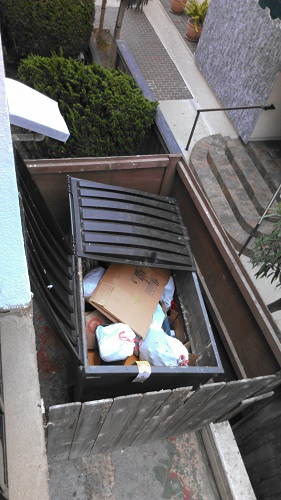 The rest of the items I was unsure about, so I took them with me. Over the next few weeks, I packed a load almost every night and lugged it into my new apartment. Suddenly my home was not so serene, but instead just as cluttered as the old. 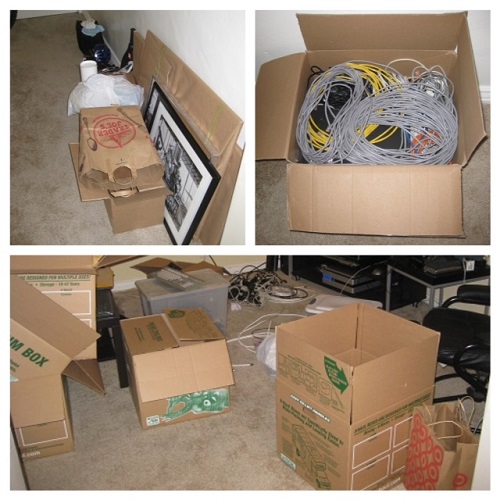 I was surprised at how difficult this process really was. Emotional attachments came along with many of my belongings. But simply enjoying having something around did not outweigh the fact that it was not otherwise useful. The cost of keeping it around (in space and effort) far outweighed it. And yet I hesitated to part ways. 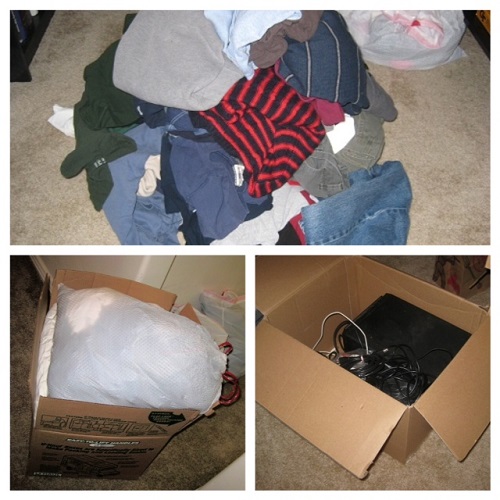 More interesting, however, was the sense of relief when I finally decided to dispose of something and actually went through the motions. When it was gone, it was gone, and I never looked back! I knew I had made a decision; a weight was lifted. Many times I went through this process.

One of the most challenging aspects was getting rid of items related to my hobbies. I love computers and technology, so I had containers upon containers of electronics. 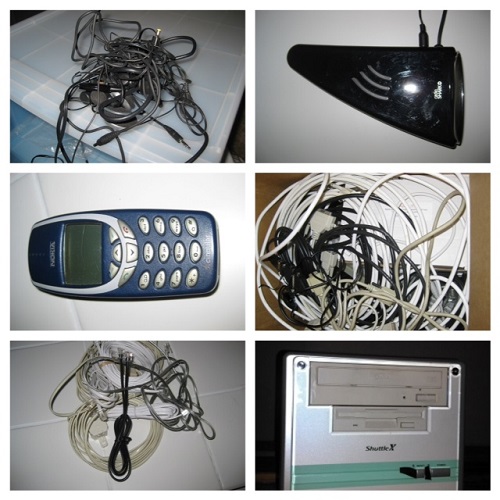 If I had multiple of something, I kept one extra and rid myself of the rest. If it was suitable for donation, I donated it. If not, I took it in to work where my coworkers happily scavenged. 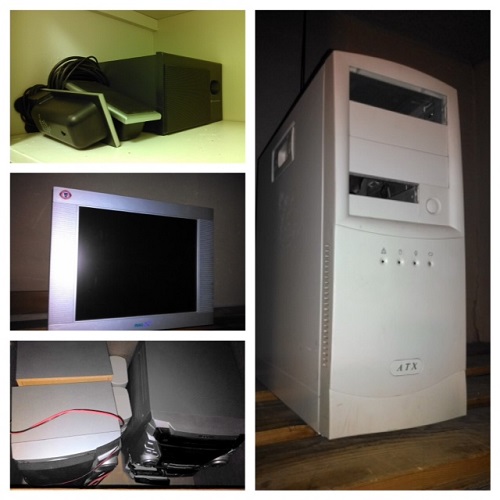 And finally, it was off to e-cycling. 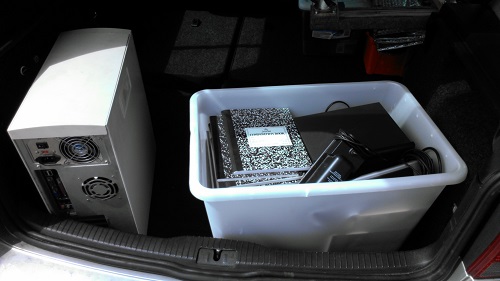 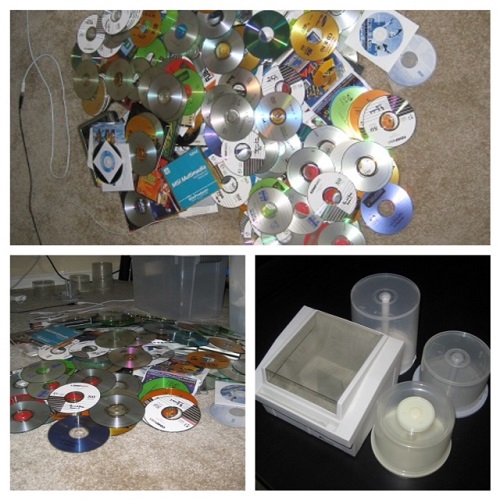 While I was processing all of this, I also had time to reflect on minimalism and belongings. Words from “Fight Club” popped into my head — perhaps there was a kernel of truth in Tyler Durden's diatribes against consumerism. I wondered further what made this process so stressful, and I realized that while our belongings reflect a lot about us — our past, our loves, our hopes and dreams — they can also blind us from reality.Disposing and donating items forced me to make a decision. In the past, I would often look at an item and think to myself,I would really love to make use of this, but I just don't have time. But I wanted to, so I kept it around. In a way, I didn't really make a choice to keep it and use it, nor did I decide to throw it away. Instead, I punted. But as Rush said in “Freewill,” if you choose not to decide, you still have made a choice! Unfortunately, that choice is typically the weakest of all.

When poring through my household, I only allowed myself to keep something if I knew through and through that I would use it. No more lying to myself. I felt more comfortable disposing of something because I knew that was not a failure. It wasn't that I didn't have time for something; it was that there were more important things in my life that I would rather spend time on. And that's okay. I was thankful that I was honest with myself.

This process really forced me to take a wider view. Three months I spent organizing, but I kept at it because it was important to me. It wasn't just my apartment I was organizing. And now I am relieved to say my place much less cluttered! As I mentioned in the beginning, this is still a work in progress. There are several aspects I could still pare down, and I fully intend to do that. And I don't intend to bring in anything new without first getting rid of something in return. Looking back, I can see how far I have come, and I am proud to live a more minimalist lifestyle!" 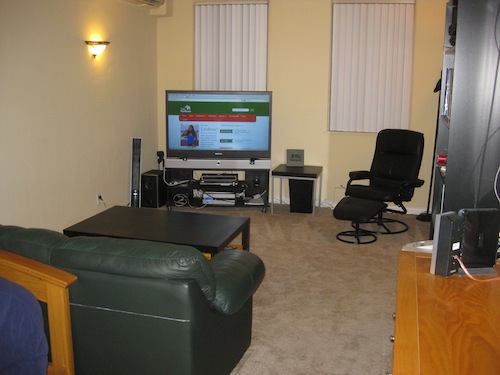 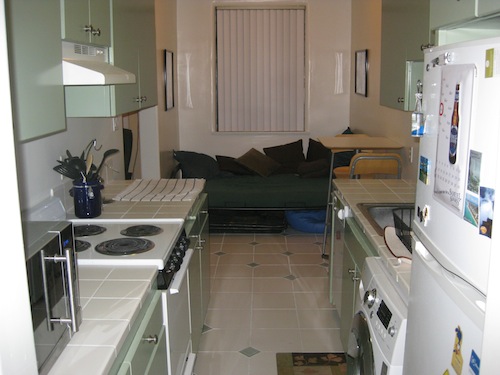 (I am so proud of you Jim! and I no-longer feel the urge to pull out the box of trash bags and start throwing things out when in your apartment *inside joke*)