Thai Pizza Recipe and Excerpt from "Food Over Medicine" + GIVEAWAY!

**Giveaway now closed. Winners have been notified via email.**

Today, I'm thrilled to be sharing an excerpt and recipe from the recently released book, Food Over Medicine, by the wonderful Pamela Popper, PhD, ND and Glen Merzer, which includes 25 recipes from the amazing Del Sroufe, author of Forks Over Knives — The Cookbook. PLUS, we have three copies of the book to give away to a few lucky Herbies!

Food Over Medicine is your look into a conversation about the dire state of American health — the result of poor nutrition choices stemming from food politics and medical misinformation — and the key to getting and staying healthy for life, backed by numerous scientific studies.

Here's my endorsement for the book:

“ReadingFood Over Medicineis like having nutrition explained to you in a no-nonsense way by a dear friend. This is not some dry textbook; it's a jargon-free conversation — one that will change your life!”

Enjoy this sneak peek at an excerpt from Chapter 1 of the book, titled "Deep Fried Butter on a Stick and Other Atrocities," an interview-style conversation between the authors.

"Glen Merzer (GM): Pam, how would you characterize the overall state of the health of Americans as a population? How sick are we?

GM: But aren’t we living longer than before?

PP: We’re not living longer in good health; we’re living fractionally longer with diseases that compromise our quality of life and that cost us a fortune. We’re living longer with diseases like diabetes and Alzheimer’s, which are both seeing explosive growth in the number of diagnoses. And, in fact, we’re not living that long at all; we’re around thirty-sixth among nations on the longevity charts, tied with our very poor neighbor Cuba. We’re in a health crisis. We spend more money by far than any other nation on health yet we have miserable health outcomes. Some people don’t perceive it that way. We have to change their minds.

PP: Our food. And I say that for two reasons: One, we have excellent data on populations with lower disease rates and we know that their eating patterns are different than ours. Two, we have excellent data on the rare physicians who use diet as an intervention tool, showing that when people adopt the right diet, they often eat their way out of their diseases. Diet is clearly the problem.

GM: Has a nation ever existed that is fatter than America today?

PP: Never in recorded history have we seen such obesity. We’ve set the record. And it’s going to be tough to beat.

GM: There’s been a lot of attention paid to obesity recently. Do you see any signs of improvement?

PP: It’s getting worse, unfortunately. When I was doing research forForks Over Knives, I was looking at obesity statistics; the statement was made in the film that 40 percent of Americans are obese. If you take a look at the website of the Centers for Disease Control, the party line is that a third of the country is obese. Well, if you take a look at how we categorize obesity and overweight conditions in our country based on body mass index charts, we’re basically saying 21 to 24 percent is normal, 25 to 29 percent is overweight, 30 percent and higher is obese, and 40 percent and higher means you’re morbidly obese. Well in India, 21 to 24 is overweight, not normal. This is also the approach in Canada and many other countries. If you pick up the population of the United States and plop it down in the middle of India and other countries with higher standards than ours, our obesity rate would approach 60 percent.

GM: So there’s a potential way out of the crisis. Just lower our standards a little more. Define 'overweight' as 'twice as fat as an obese Indian.'

PP: It’s almost unbelievable. No other population has ever had such unlimited access to so many bad foods to become this overweight. And no population has ever been as misled as ours by a perverse system of incentives in food manufacturing, the advertising industry, and the medical field. So we’ve eaten ourselves into the dubious distinction of being the fattest population in recorded history; now we’ve got to figure out how we’re going to teach more than three hundred million people to eat their way out of this terrible state."

Super interesting, right? And full of muchmore information, plus the sources to back it up. I don't know about you, but I'm pretty pumped to try this Thai Pizza recipe from Del Sroufe, one of 25 recipes included in Food Over Medicine. 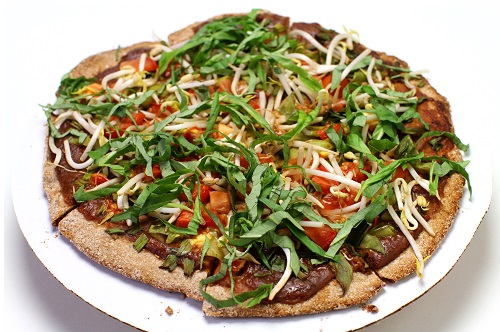 Preheat the oven to 375 degrees. Spread the peanut sauce over the crust and top with snow peas, green onion, and tomato. Place the pizza on a baking sheet and cook for 12 to 13 minutes. Remove from the oven and top with the sprouts, basil, and peanuts.

For the peanut sauce, combine the garlic, ginger, jalapeño pepper, ground ginger, cayenne pepper, Bragg Liquid Aminos, vinegar, sugar, and water in a large pot; bring the mixture to a boil. Let cook one minute and remove the pot from heat. Add the peanut butter and whisk to combine well.