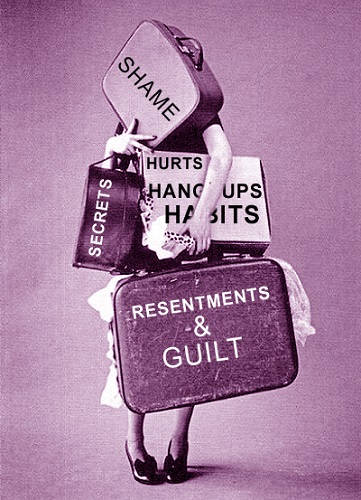 My Dad ("Papa Herbivore" as he's known on this blog) sent me two quotes he thought would make great topics for Minimalist Monday. He sends me quotes every day, but sometimes he'll look for themed ones :)

"Simplicity is making the journey of this life with just baggage enough."— Charles Dudley Warner

I've written about letting go and self forgiveness (we are not the worst things we've done) and removing toxic people and unhealthy relationships as part of this series before, yet it is such an important issue that I think it deserves a revisit and more exploration.

A huge driving force behing my minimalism isn't just a simpler life, but a happier one.

As I wrote in my previous post about toxic relationships,"I'm looking for less stress and more happiness. I removed environmental stress — cleared away the clutter in my home, but what about emotional stress?"

And that's what I'm focusing on today: emotional stress and baggage.

Since becoming a minimalist, I have had to "break up" with two friends because I realized our relationship was not healthy for me.

It wasn't that these people were a bad influence on me (i.e., peer pressuring me to drink or do drugs, or something else that's not beneficial). We just weren't good for each other. They didn't bring out the best in me. 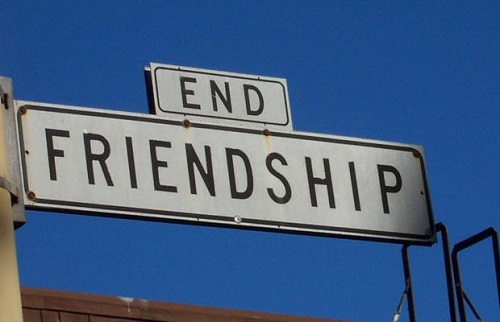 For example, this one friend and I would argue nearly every time we talked. Our constant bickering was baffling because we fundamentally agree on nearly everything and live very similar lifestyles. It's not as if one of us was a Republican and the other a Democrat and our views were polar opposites on every issue. Actually, I have a friend like that and we almost never argue!

But there we were, arguing constantly and it soured my mood every time, often for the rest of the day. Scott (my husband) picked up on this. He noticed the shift in my moods and commented on howI was always irritable and grouchy after talking to this friend. After it happened a number of times, Scott suggested, "maybe you shouldn't talk to them anymore."

What my husband was saying made sense, but despite the arguing, I still really liked my friend and I was willing to accept some culpability. It takes two to tango.Surely there was a way to resolve this, I thought.

In defense of my friendship, I pointed out what a good person my friend was and all the good things that have happened as a result of our relationship (in spite of our constant arguing).Put simply: It hadn't all been bad. 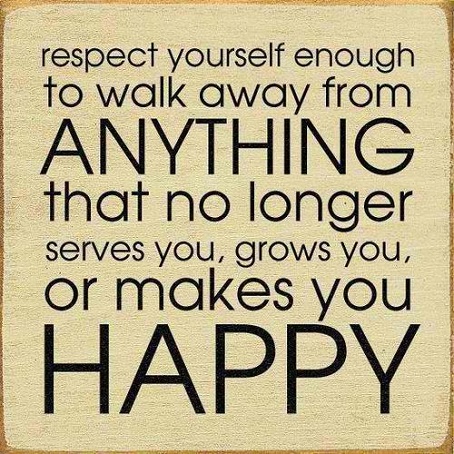 This person wasn't a "bad apple" and because of that, it made "breaking up" seem like an extreme measure. If only they'd been a jerk!

For a while, I tried to alter my own behavior. I tried to be more agreeable. If I sensed we were migrating towards an argument, I tried to change the topic. I even mentioned to my friend on several occasions that I didn't want to argue anymore. Yet nothing improved. I also had this feeling like I was wearing the wrong shoe on the wrong foot — I wasn't being myself, and what kind of relationship is it if I can't be me?

Eventually, I started to avoid calls and texts from this friend. When they would follow up with me (why hadn't I returned their previous phone call, for example) I would fib and say I was busy. Which wasn't entirely false — I am busy, as we all are, but I wasn't so busy I couldn't return a phone call for three weeks.

Of course this behavior didn't make me feel good about myself, either. It was dishonest.It wasn't me.

Finally, I had to face reality: it just wasn't going to work out. We just weren't good for each other. 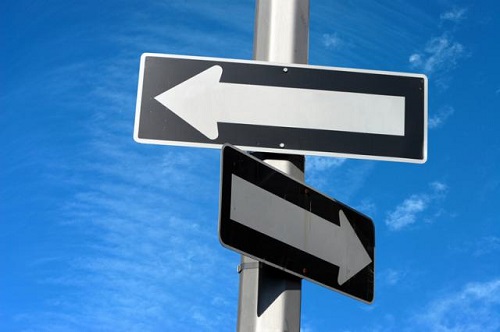 I still think I am a good person and that my friend is a good person. If I have to blame something, then I'll blame our personalities. They just didn't mesh well.

To be entirely fair, my friend did not find our relationship, or our arguing, as toxic as I did.They were shocked and hurt by the break-up, but I just couldn't go on. I couldn't continue to involve myself in something that caused me so much stress and angst. I can't explain it really, but that friendship, for whatever reason, was just not healthy for me.It brought out the worst in me. It made me not like myself.

I felt bad ending things -- I still do, because I genuinely liked this person. I still have immense respect for them, think they're great, and wish them endless happiness and success... but we didn't go together like peas and carrots. We were more like oil and water.

As much as I hate to say it, ending that relationship provided me a sense of relief I can't quite describe. Initially, I had a lot of emotional baggage and remorse. I had my share of grief, but once that lifted I realized I was better off.  I don't feel a twinge of anxiety when my phone beeps. My days are not soured by a phone call.

It's hard to be so honest about this, butI don't think I'm alone. I think everyone will eventually find themselves in a relationship that is not healthy or productive and it's unexplainable. 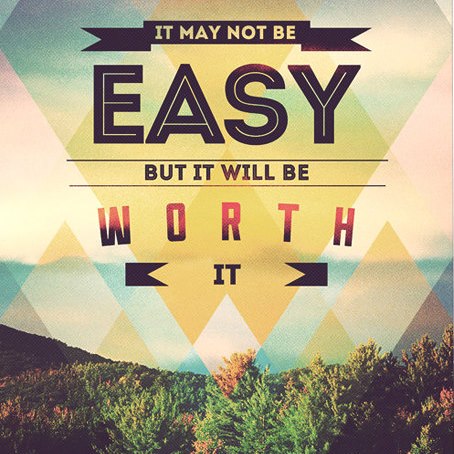 I went through something like this once before with an old boyfriend. Love wasn't the problem. No one had fallen out of love or cheated or met someone else. We loved each other and got along fine. Our relationship wasn't broken. No one was a jerk. The problem was we just wanted such different things out of life andit was all too clear that our lives were going in separate directions and not together. That break up was 100 times harder than the ones that dissolved after a nasty fight. It was harder to say, "I love you... but..."

Minimalism has taught me how to let go of my emotional baggage. Just like a chair I never sit in, I shouldn't keep someone in my life just because they're in it, especially if keeping them in my life is doing me harm.

I'm living a life of more simplicity, which extends to all aspects of my life. I strive to cherish the relationships I do have, but I'm also choosing to surround myself with people that make me feel good about myself, that make me a better person, that are a good influence on me.

I want love and light and meaningful relationships.I want the experiences I have with others to be as positive as possible. I know my world can't be perfect all the time but if I can remove something that routinely makes me unhappy or gives anxiety, I feel that I should. Even if it's hard or painful and there isn't a better excuse.

Yes, it would have been easier to get in an epic fight. Then I could have found comfort in my anger over what happened instead of facing the hard truth that things just didn't work out. It's not you, it's me.

Have you ever had to end a toxic relationship?