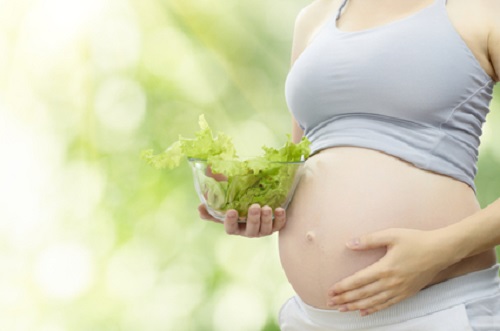 Were you plant-based (vegan) before your pregnancy?

"Four months after I had made the switch to eating vegan, my husband and I conceived our daughter. I had a vegan pregnancy." — Cassie S.

"I was not vegan before my first pregnancy. In fact, I was the opposite! We were following a low carb, high protein diet. I quickly had to add carbs because my sugar was dropping too low and I was getting dizzy spells. But I actually just found out I am pregnant, and will be following a plant-based diet throughout. We have been plant-based for a little over a year." — Betsy L.

"We made the switch when I was 5 months pregnant after watching Forks Over Knives. I am also 4 months pregnant with our Herbie baby #2! And not to get too graphic, but it only took us a month of "trying" and not trying very hard either (haha!). Whereas with our first son, it took us 6 months of very actively trying — and we were young (24 & 27)... but still on the SAD diet!" — Ashley M.

"I was vegan for 8 months prior to our twin pregnancy.  We had a prior pregnancy but lost the baby. I had only been vegan for 3 months at that time. (My veganism had nothing to do with our loss; I was assured this repeatedly by my doctor.)  The fact that I was even getting pregnant was especially fascinating as I was told at age 14 that I would have trouble conceiving due to Polycystic Ovarian Syndrome.  Both pregnancies were unplanned." — Ashley S.

"My pregnancy was smooth.  The glucose test was not an issue for this vegan momma!  I gained 40 pounds eating beans, veggies, fruits, and grains." — Cassie S.

"I have had a lot more morning sickness with this pregnancy (#4) than with the first 3, but that is related to hormone levels, not diet. I have come to the conclusion that giving in to unhealthy cravings does nothing more to settle my stomach than eating a grapefruit or a green salad. I am trying to focus on fresh raw fruit and veggies because I know it is what is best for me and for baby." — Leah F.

"Overall, yes. I had very little morning sickness and only a few other aches and pains. I had heard about sciatic nerve pain or round ligament pain, none of which I experienced.  I had terrible heartburn (Turns out my craving for tropical fruit was helpful — papaya has papain, which is helpful in the fight against heartburn.)  I also developed pre-eclampsia at 35 weeks, but we expected this along the course of my prenatal care.  My perinatologist had been keeping an eye on my misbehaving placenta the entire pregnancy.  In hindsight, I had a great pregnancy and I should not have whined as much as I did." — Ashley S. 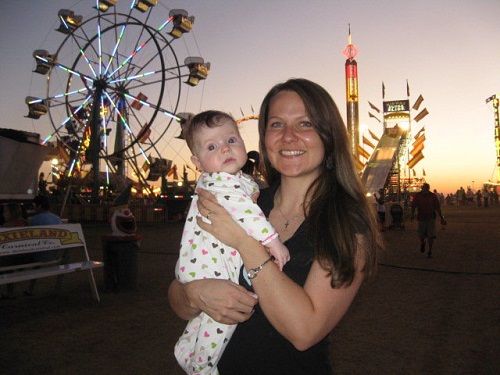 Herbie Mama Leah F. with one of her mini Herbies

Many women complain of weird cravings during pregnancy. Did you have any for non-vegan (not plant-based) foods and if so, how did you manage them?

"I was having such crazy food aversions that I was already eating a mainly plant-based diet (Hummmm, wonder if my body was trying to say something!) when we made the switch to a plant-based diet. And one main thought that kept circling in my head was, "if they tell you to avoid certain foods in pregnancy like deli meats, raw eggs and limit fish because they can cause harm to the developing baby... Why is it ok to eat these foods later on??" — Ashley M.

"True cravings are supposed to be a 3rd trimester thing, but honestly I tend to attribute them to an unbalanced diet — the body's way of saying it is missing out on something. I eat a large variety of fresh fruits and veggies, and I've never really had any strange cravings to speak of. Pregnancy does some weird things to your body and appetite is no exception." — Leah F.

"I don't think I had but one weird craving.  Early in my pregnancy, I ate an everything bagel with hot sauce on it; no veggie cream cheese, no hummus, just hot sauce.  Best bagel ever. Based off of something that happened during my pregnancy, if a woman had a craving for animal foods, maybe smelling that food would help?" — Ashley S.

Was your doctor and/or midwife supportive of your vegan (plant-based) pregnancy? Did you seek out a "veg-friendly" doctor or establishment?

"I went to a midwife practice; they were very supportive of my vegan pregnancy. The head midwife/OB was a vegetarian, so she knew that I could have a completely healthy pregnancy. I would think that if a doctor is not supportive of a vegan pregnancy that 1) the mother needs to remember that her doctor gets very little nutritional education in the course of his or her medical degree and 2) that if she ever feels disrespected about her lifestyle, to look for another doctor who will respect her decision." — Ashley S.

"The practice I use probably has 12 different doctors, midwives, and nurse practitioners. I see a different one each visit. The truth is that they almost NEVER even mention nutrition or ask about my diet, which is kind of sad, but at the same time I don't have a weight problem so they probably don't see the need. (Most doctors don't care that much about your diet as long as you aren't gaining too much weight. They figure you are doing something right and leave it alone as long as their are no ketones in your urine sample). On the rare occasion that it comes up, I say something like, 'Oh, I eat lots of fresh raw fruits and vegetables, I consider nutrition very important.' And I leave it at that." — Leah F.

"The practice I use has 2 doctors and 3 midwives that you rotate through during pregnancy. I have only had one appointment so far. We told the midwife we were vegan. She listened to us and then recommended that I eat fish twice a week. I think she might have been confused..." — Betsy L. 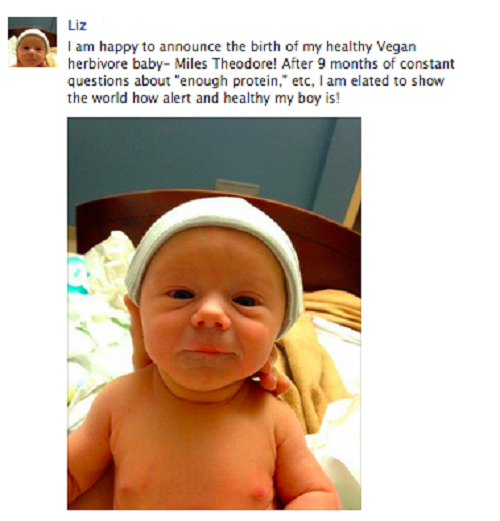 This question is specifically for Ashley S. During our interview, you mentioned you had to feed your twins non-vegan formula. Was this a struggle for you, and do you have any advice for other mamas who use formula?

Yes, it was a struggle to give them formula, but not necessarily because it was not vegan.  It was more of a struggle because I felt that my body had failed at providing nourishment for my children.  As far as I know, there are no truly vegan formulas as most of them contain the vitamin D3. At the time, it didn't seem like there were any other options.  A friend of mine from high school mentioned to me that she is kind of kicking herself now, because she didn't even think to donate her milk to us (although she is not vegan, as long as it was breast milk from a healthy, trust-worthy mama, I would have preferred that over formula.  In my eyes, non-vegan breast milk > non-vegan formula.)  I suppose, if I had known of the resource, donor milk would have been an option." — Ashley S. [Editorial Note: There may be breast milk banks in your area].

Did you take any preventive measures or do anything special since you were having a vegan pregnancy?

"Since I switched during my pregnancy, I first wanted to double check with my doctor and do my research to make sure I'd be able to get enough calories and nutrients that a healthy pregnancy required. My husband and I literally took every food item we'd eaten for a whole day and make a list of calories/nutrients and, surprisingly, we didn't need to make too many adjustments." — Ashley M.

Did you experience any negative commentary from family or friends? How did you handle it?

"One of our family members literally told me, "if anything happens to this baby because of what YOU are doing. I will never forgive you!" So I knew this was something my husband and I would do with just the support of each other because we felt like it was the right thing for our family." — Ashley M.

Is your pediatrician supportive?

"We basically hated our first ped for many reasons including him freaking out when our son refused to drink cow's milk (kid won't drink any kind of milk at all...we've tried every variation out there).  We never brought up our diet change with him but did bring it up as we sought out a new pediatrician.  We were pleasantly surprised when the new ped told us he was "vegan-ish" for the health benefits. The new ped said he respected our decision to raise our son vegan." — Tina M.

"Our pediatrician is fairly supportive of a vegetarian diet, but she was mildly shocked that we were not giving the girls eggs.  She asked what the girls eat for protein and we explained."  — Ashley S.

"Our doctors are pretty supportive except for the occasional  make sure they're getting enough iron, protein, etc. Otherwise, no objections." — Kim F

"I have not mentioned it to our doctor. He does know we no longer do dairy.  My children have their yearly testing done and everything comes back good." — Erica C.

"My kids are never sick, so we don't see the pediatrician much. I have found that they see no need to argue because my kids are so healthy. If they do object, I listen to their objection and then refuse to argue. They quickly drop the subject every single time." — Leah F.

"Our new doctor is very supportive. Her exact words: 'That's great! Good for you! That's a very healthy lifestyle!' Our first pediatrician? We never even brought it up but after his 12-month appointment, when his first doctor said she did not support me in continuing to breastfeed (saying 'it was unnecessary') and she pushed cheese, yogurt, and steak... I felt we needed to find a new pediatrician. We also just found out that another doctor in the practice just made the switch to being vegan!" — Ashley M. 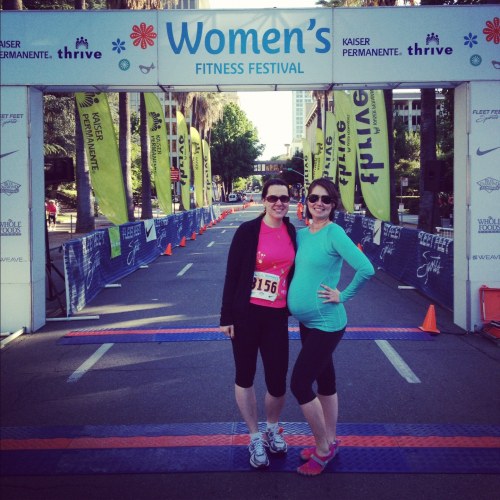 Margret (one of our past Herbies of the Week!) during her plant-based pregnancy

Herbie of the Week: Margret (and her Plant-Based Pregnancy)

Resources recommended by our Plant-Based Mamas:

Skinny Bitch Bun in the Oven

The Complete Idiot's Guide to Vegan Eating for Kids by Dr. Andrew Villamanga and Dana Villamanga