Minimalist Monday: I Am... (How to Make Changes and Make Them Stick) 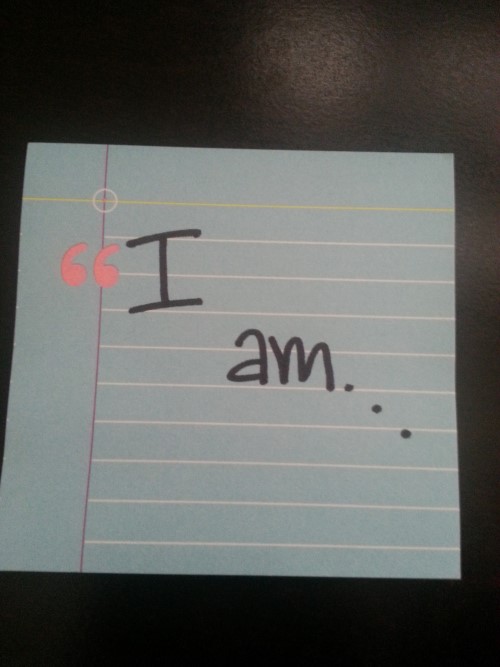 What we say after "I am" is very powerful. It's an affirmation.

If you say "I am now plant-based" — you will be. Or at least, it is more likely you will be than if you say or affirm nothing at all.

Why? We have a deep need inside each of us to be consistent.

There is more to it than that, though.

By making an affirmation (and the more public the better), our attitudes start to change. We start to see ourselves differently.

Take, for example, a psychological study done by Jonathan Freedman and Scott Fraser in the 1960s. (Yes, I know it's an old study, but it's still relevant! Hear me out.)

A researcher, posing as a volunteer, went to various homes in a California neighborhood, asking the homeowners to place a gigantic (ugly) public service sign in their front yard that said "Drive Carefully." The researcher showed the owner what the sign looked like and everything. Not surprising, 83% of the first group refused.

However, when the same sign was shown to another group of homeowners, in the same neighborhood, with the same big, ugly sign and same request, a whopping 76% agreed. WHAT?

For the second group — those that agreed — one small, trivial detail was different. A few weeks prior to the "drive carefully" sign request, a researcher, posing as a volunteer, went to the second group of homeowners a few weeks before asking them to sign a petition to "Keep California Beautiful." Of course, nearly everyone signed the petition.

But what does a petition have to do with driving safely? And why did the petition signers agree to the ugly sign when their neighbors did not?

Freedman and Fraser learned that signing the beautification petition changed the view those homeowners had about themselves. They saw themselves as public-spirited citizens who acted on their civic principles.

Their attitudes about themselves changed. "I am..."

Years later, Dr. Michael Pallak found similar results in his study. Before a cold winter in Iowa, he talked to two groups of homeowners. Both groups received a lecture on the importance of conserving energy and were asked to promise to reduce their use of energy. All agreed.

The only difference? The second group was also told if they successfully reduced their energy usage, their names would be praised in the local paper.

After the first month, those that weren't promised newspaper coverage did not make a change. Their use was equal to those of other homeowners who were not contacted at all. Those that were in the newspaper incentive group, however, did reduce their energy use.

You are probably thinking it was the bait of a prize — the public praise that got the second group to make a change — and you're right... but then something really interesting happened. After the first month, Pallak apologized and said he couldn't run their names in the paper after all.

Why? Once the commitment was made (even though that commitment was made in hopes of a "prize"), it started generating its own support. The homeowners began acquiring new energy habits, began feeling good about their public-spirited efforts, began convincing themselves of the importance of energy conservation and started viewing themselves as energy conservationists, and so forth.

Their attitudes about themselves had changed.

You can read more about these studies and others like it in the book, Influence: The Psychology of Persuasion by Robert B. Cialdini, Ph.D.

This book helped me understand why I have tried and failed at so many different goals in my life. I tried to stop biting my nails for years. YEARS. It wasn't until my sister stopped biting her nails, that I resolved on Facebook that I would do the same. Was that all it took? Me saying I'd stop biting my nails too, publicly on Facebook? Apparently.

Accountability is an amazing motivator.

I was also recently talking with a woman who went plant-based several months ago in the toughest of circumstances. No one in her life supported her. Not her family. Not her friends. Not her coworkers. They were all naysayers.

She would surely be forgiven, then, if she succumbed to peer pressure? Right? Except, all that negative turned out to be positive! She told me all those people rooting against her helped her stay strong. She couldn't wait to prove them all wrong. She said to me, "They will never know how helpful they actually were in helping me keep my commitment to myself... and to prove the they were wrong! I could do it! I did do it!"

Back to what I said about our need to be consistent :)

We want to be true to our word. We want our actions to match our words, especially if we say them publicly.

This is why affirmations are so powerful.

And what could be more minimalist than a simple statement that can help us change?

I so much believe in the power of suggestion and I truly believe we can harnass that power to be our best selves.

So post it on Facebook. Tell your coworkers. Send me an email. It doesn't matter... but do it.

Make that affirmation — and change begins!