Minimalist Monday: Be An Early Bird (10 Reasons to Wake Up Early, and How to Do It!) 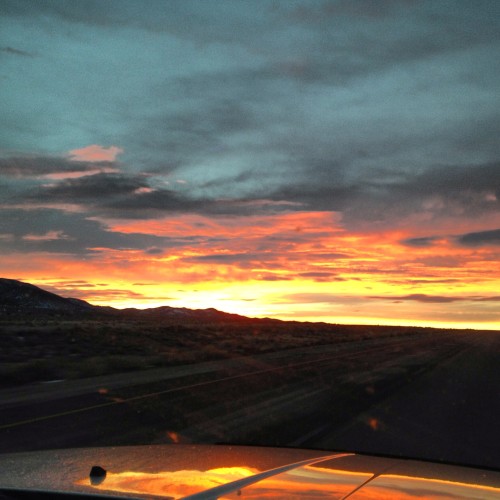 We all know that saying, "the early bird gets the worm." I've always been what you might call a morning person. Even when I try to "sleep in," I'm still rousing by 7:00 a.m. 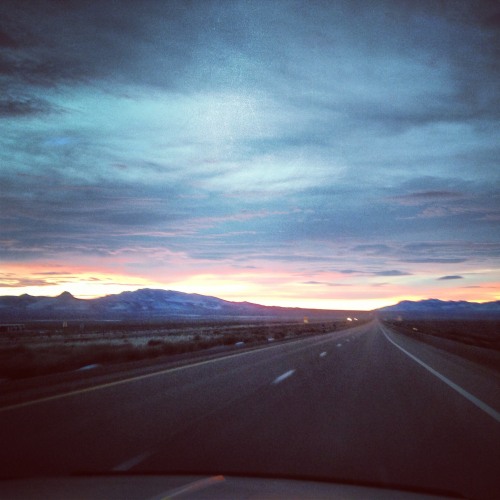 Sunrise in Nevada. I was driving from Tahoe to SLC last week for a HH Meetup! It was amazing to watch the sun come up in the dessert/mountains.

In college and law school, I opted to wake up early, rather than stay up late studying. I had high marks, and a recent 2008 study by Texas University suggests that was due to my habits. In the study, college students who identified themselves as "morning people" earned a full point higher on their GPAs than "night owls" (3.5 vs 2.5).

Anyway, a few weeks ago my assistant (Lindsey Talene) was visiting me in CA. Normally LT puts the morning blog posts on Facebook since she's not three hours behind the east coast like I am, but now that we were both in CA, I volunteered to be the person getting up at 5:00 a.m. to publish the post.

An amazing thing happened — I was infinitely more productive. It actually amazed me how much more I accomplished. I also had a great sense of satisfaction each day. I felt accomplished and productive, partly because of my increased work output, but also because I'd finally (finally!) had days where I did everything that I wanted to do. At night, I felt cozy and comfortable taking it easy watching TV with my husband or working on a jigsaw puzzle with LT (my favorite pastime). I didn't have anything else to do. I could...relax.

Getting up early also had these other effects: I ate better (I had time to make a healthy breakfast for everyone — no rushing to feed myself, or them, while rushing out the door late). I exercised more (which helped me feel less stressed, and also promoted better rest at night) and I felt genuinely happier because I was greeting my mornings (no "ack. is it morning already?") and I found a certain kind of peace in the early darkness and quiet.

To summarize, 10 reasons to wake up early:

1. Improved Quality of Life. Getting up early gives you time to exercise (before the family is awake or your official work day starts). Regular exercise has far-reaching effects: improved mood and fitness, reduction of stress and anxiety, increased energy throughout the day, and deeper sleep at night so you feel rested and can be more productive the next day. Some studies have also shown  morning people tend to be more agreeable and optimistic, as well as satisfied.

2. You'll be more proactive. In 2010, Harvard biologist Christoph Randler discovered early risers were more proactive. They were more likely to agree with statements like "I spend time identifying long-range goals for myself" and "I feel in charge of making things happen." Randler's research also revealed that "morning people" are more likely to anticipate problems and minimize them efficiently (a key trait to being successful in the business world).

3. Planning.We also know that having a plan is the key to accomplishing what you want — it's why the meal plans make it so easy for you to eat healthy; you have a plan! Most early birds use their morning quiet time for organization, goal-setting, and planning out their days and weeks ahead.

4. More time to relax. If you've gotten a jump on the day, you'll have more quality time in the evenings to spend time with family or do what you want to do (i.e., puzzle) and without that nagging feeling like you're slacking off and you should do something else. No need to bring work home! Relax and unwind.

5. Better commute. Skip the crowd at the gym and the traffic on the street by getting up a little earlier.

6. Increased Productivity / Shorter Workdays: Waking up early and having a "quiet hour" at work will maximize your productivity (as I experienced). You'll get much more work done compared to usual. Be amazed by how much you accomplish by noon. Come 5:00 p.m., your work day will be over. P.S.: If you're constantly distracted at work, I can't recommend this enough! Less distractions. More efficiency. (You'll also have more energy thanks to improved sleep).

7. Greet the day.GOOD Morning indeed — not "ack! It's morning. Just 5 more minutes in bed!" Once you get used to waking up early, you look forward to waking up and mornings. I greet each new morning as though it's a gift. I'm here another day getting to do the things I love. Getting to be with the people I love. I have another day to inspire change!

8. Less Stress. Experts say that how you lead your life the first hour after you wake up sets the tone for your day. Trade in rushing and worrying about being late for a zen experience.

9. Breakfast. Getting up early means you'll not only time for breakfast, you'll also eat a healthy one. Often, our initial meal set the tone for how we eat throughout the day. Start the day right! (Can't recommend our meal plans enough!)

10. Better sleep: Sleep experts say that if you go to bed earlier, and wake up earlier, your body will be more in tune with the earth's circadian rhythms, which offer more restorative sleep. Sleep needs also vary depending on your activity level, diet, sunlight exposure, etc., which is why it's better to focus on wake-up time as opposed to bed time. By waking up early at the same time each day, you'll stabilize your circadian rhythm. Try to set and rise with the sun!

Another picture from the drive!

How to Become an Early Bird:

3. Distance yourself from the alarm clock. I keep mine on a dresser across the room so I literally have to get up to shut it off. That'll get you out of bed and avoiding the snooze button.

4. Treat yourself.For most of us, we don't want to get up early — it sounds awful! So the first few days (or weeks), treat yourself in the morning. Don't use it for anything else — not work or chores. Do a little yoga, read a book, read a trashy magazine — whatever your guilty pleasure is (chocolate?). It's your reward for starting a good new habit.

Finally I'll close with a quote:

Editorial Note: Since I am a typo queen, a few months ago I hired my good friend Nichelle to start editing my blog posts. Recently, I asked Nichelle, since she lived on the East Coast, if she could put the morning posts up at 6am on Facebook during the week so LT could have some much deserved time off and I wouldn't have to get up at 3am to cover her... "vacation."
Nichelle agreed, even though it would require her to get up much earlier than she normally did to put up the post, and then she would still go to her full-time (and often demanding) job all day after.
Anyway (I'm getting to my point--swear!) After editing this blog post, here's the email Nichelle sent to me:
I just read this post and I have to agree, even though I am historically the most anti-morning person ever. Doing the morning posts has been amazing for me. Starting that AND the meal plans makes me feel better about so many things. So thanks :)