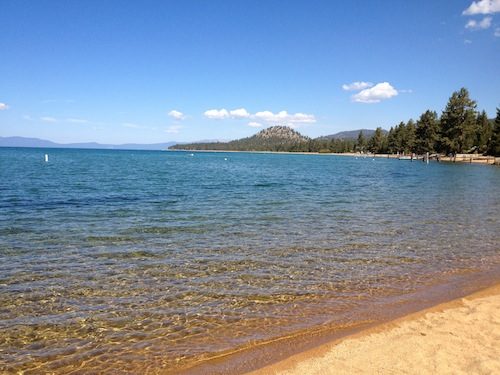 What could be more minimalist than having no regrets and no emotional baggage? (It may not be physical, but less is more there too!)

A few months ago, someone noted all the (self-inflicted) moves I had in the last 10 years or so: Charleston, Boston, Manhattan, Los Angeles, Colorado, Abroad — just to name a few, and asked if I'd ever regretted any of those moves. [Editorial note: I moved to Tahoe, below, 2 days ago.]

My response was simple: I don't live my life in a way that allows for regrets.

I stumbled on this concept in high school, when someone asked me if I regretted a choice I had made, given how things had turned out, and my response was"I made the best choice I could at the time with the information I had. It's unfair to go back with new information and judge myself."

Little did I know that this would become the core of my belief system for navigating through life and making decisions.

I'm not saying that every decision I have made has been a great one. I'm not saying that things have always worked out the way I wanted them to, but I haven't regretted any decision, even when things end up a little sour, or at least, not the way I had wanted or hoped, because I know that I made the best decision I could have, given the limits and knowledge I had at that moment the decision was made. (Wow, that was a long sentence!)

Do I regret going to law school?

I don't want to ruin too much of the story in Happy Herbivore Abroad, but the short of it is I went to law school and hated it. I finished, became a lawyer, too, but hated that as well. So after 6 years of misery and $150,000 in educational debt, I changed careers.

It's not fair to use all this new info at 31 against my 22-year-old self.When I was 22, going to law school was a good choice based on the information I had at the time. I had just graduated college. I didn't know what I wanted to do, but had enjoyed being on student government and the debate team, so law school sounded like a good fit. Many of my teachers had told me I would make a great lawyer and I had liked all of my "law" classes in college. I had even enjoyed mock trials in high school. There were lawyers in my family — it just made so much sense.

So I don't regret my decision. I'm not sure I could have even made a different choice back then anyway. I mean yes, technically it's possible — but when I consider the real circumstances — the thoughts, the emotions, I don't think so. I'm still me in that equation. I'm still limited to what I knew and felt then. If I could have truly made another decision, I would have.

If you grapple with and accept this idea, but still feel you made a mistake, then acknowledge it. Make amends if you can and recognize it as an opportunity for growth.

Sometimes I feel like we live in a society where mistakes and failures are unacceptable — as though they should be swept under the rug and forgotten. I don't know why failure is so embarrassing. Failures and mistakes are often what make us who we are.

I'm not perfect.I still fear failure and even get embarrassed by it sometimes, but when I take away the stigmas and pride, I realize, instances in my life that could labeled as "mistakes" or "failures" — those were the experiences that led me to the most success. Perhaps in a very roundabout fashion, but I couldn't have gotten to Point C without going from A to B first.

Perhaps not the best example, but I was in an awful relationship in college. (I've blogged about it before, "One Piece of Advice We All Need"). I was miserable. All we did was fight, break up, get back together, "start over," and so on.

Once I was finally out of the relationship, it would have been so easy to think, "what a mistake that was!" Or what a giant waste of my time and emotion it was. It was tempting, but I let myself off the hook. I must've thought it was the right decision at the time I was making it. The reality is, I'm not sure if I hadn't been through that, that I'd have really, truly appreciated the relationship I had with my next boyfriend, and now husband.

I can remember saying to one of my friends "I'm really glad all that happened with Jacob* because it's allowing me to appreciate all these little things Scott does — things that would have been lost if I hadn't been with Jacob first."

No regrets. I mean it. Just life experiences. Dump the baggage — be more minimalist!

Recently, a good friend of mine from high school moved from Australia to Canada. She posted this quote on Facebook, which I just loved:

“The saddest summary of life contains three descriptions: could have, might have, and should have.” ~ Unknown