Herbie of The Week: Ferrin 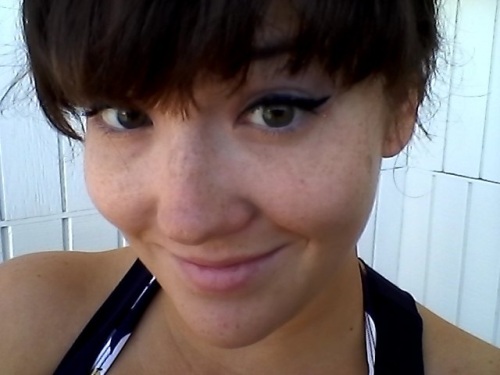 Young and healthy, Ferrin couldn't figure out why she had severe abdominal pain and bleeding. After a scary diagnosis and surgery, Ferrin adopted a plant-based diet hoping for a brighter future -- and she got it!

HH: Tell us a little bit about your history:

I'm young (25). I had been on a "healthy" diet for a few years and exercised regularly, so when I started to bleed and experience pain for two and three weeks at a time, I was very confused. For the last three and half years, I was struggling with extreme abdominal pain.

HH: Do you know what caused the pain and bleeding?

I found out last September the pain and bleeding was the direct result of a golf ball-sized cyst on my right ovary.

HH: Yikes! That's scary! Was happened after your diagnosis?

I had surgery immediately because of the dangers that it imposed. After that, I was put on three types of medication. After the operation, I also found out that I had severe endometriosis (an autoimmune disease) and that I may never have children. The doctor told me that I would need to have all of my female organs removed or keep trying medication to buy time. I am currently a college student, I have never been married, and I was absolutely terrified that I would never have children of my own. I was desperate for another option.

HH: My heart weeps for you. I can't imagine how terrifying and hard this was for you to face in your early 20s. What did you do?

I started researching other methods of healing like alternative medicine, herbs, vegetarianism, etc., which brought me to read several books (like Skinny Bitchand Happy Herbivore) and movies like Food Matters, and it really got me thinking. I knew I didn't have anything to lose and the support of my boyfriend helped a lot.

HH: Did you see any improvements when you adopted a plant-based diet?

By May 2012, the pain in my side had completely subsided, the bleeding has stopped, and even the fatigue that seemed to plague me all the time is gone.

HH: That's incredible! Have you experienced any other benefits?

I've got energy, my stomach problems have stopped (as well as my boyfriend's irritable bowel syndrome), and I don't feel sick when I eat anymore. I'm sure that only good things will continue to happen and I tell everyone that will listen about how life-changing this diet can be. I just wish I would have known about this sooner and realized how easy vegan living is! Cooking is now one of my favorite activities, and your cookbooks made it so simple! Thanks so much!