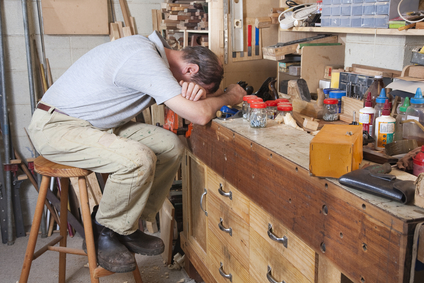 Last Monday, I mentioned that I had come across an article titled "Conquering Clutter" in the October issue of Healthy Beginnings lifestyle magazine that I found quite fascinating from a minimalist perspective.

The first part of the article talked about the negative effects of clutter (which I discussed last week ), but the second part went to the psychology of why we might be cluttered people in the first place.

According to Milligan, "Most cluttered people have high creativity and a high intelligence quotient. It goes without saying that most have a spending compulsion or they find other methods of obtaining things.Many have an attitude of lack and limitation, fearing that if they don't save that item they won't be able to afford to buy it later."

One of my extended family members is what you might call a packrat. He doesn't deny this. He saves pretty much everything on the justification that "you never know when you might need it later," and anytime he plunges into the overstuffed garage or basement to come out with some random item any of us needed, he's affirmed. "You see! This is why I save things," he'd say.

Still, I can't go near his basement or garage. It's neatly organized, I'll give him that, but all that stuff gives me anxiety. When asked about my own personal compulsion to throw things away, I blame Uncle Larry, which is a joke. His hoarding isn't the result of my... whatever the opposite if hoarding is :)but I often wonder why I'm so quick to throw out things like furniture or electronics (or donate them), when he's so militant about saving plastic bags.

That was Milligan's next point, "For most, there's usually an inability to discard items for fear that they, or someone else, will need them."

She must know Uncle Larry!

Anyway, Milligan then went on to talk about how being a cluttered person is not usually an isolated issue. 'Clutterbugs' (as she lovingly calls them) "often have time management issues such as always being late; or money management problems." Milligan also noted that "clutterbugs may be overweight or have compulsive eating habits." OCD or ADHD can also be attributed to the clutter (according to Milligan) — which perhaps explains why I'm so anti-clutter. I have OCD.

Then Milligan said something that made so much sense, I couldn't believe I hadn't realized this sooner: Milligan writes, "If your parents grew up during the Depression, they were conditioned to save everything and use it 'til it was just a rag, and then use it some more." She continued, "Every thought and emotion has a vibrational frequency, so as you were growing up, you were bombarded constantly with those frequencies of fear of having nothing and therefore needing to 'save' what you do have."

I come from a proud and humble working-class family. Both of my parents did not grow up with much (my father, especially, was very poor as a child). Skipping back another generation or two and you'll find my relatives who immigrated to the U.S. with nothing but the clothes on their backs. I can't even imagine the struggle they endured. I guess what I'm trying to say is: the "scarcity" model has been woven into our upbringing.My family has been conditioned to save — for generations — and I suspect that's true for a lot of us.

Milligan said the first big hurdle is that you have to WANT to change. Which is my first step in my "How to Be a Minimalist" post. You have to accept minimalism or at the very least, that you at least want to stop being so cluttered. Look around and tell yourself,this is not working. I need to be more organized. I need to have less stuff. I need to consume less because all this stuff does is consume me... my time. my money. my energy.

[Note: I did this — exactly this — with myself and I'm a work in progress (I still haven't found Lily Bean's spare collar) but I'm far, far better off than I was living in a cramped apartment filled to the gills with my "stuff."]

Next, you must identify what is causing you to be a clutterbug.This may require some deep soul searching and possibly, professional help. I suspect most of us are more like Uncle Larry than the more extreme cases of hoarding that tend to stem from a personal trama.

My advice is to start tossing (or donating) a few things.Take it a small project at a time. For example, start with your car or your desk. Once you've cleaned your desk you'll feel great — instant gratification that will propel you forward to do more. Starting is hard, I know. It seems like an insurmountable mountain. A big task that's tiring just thinking about it — so don't think about the big picture or the big mountain. Think about a small project you can do right now. Clear off that desk. Clear the trash in your computer. Erase your browser history. Seriously. Just DO something.Get the ball rolling...

Banish the Clutter Forever: How the Toothbrush Principle Will Change Your Life by Sheila Chandra