Minimalist Monday: The 1-In, 1-Out Rule 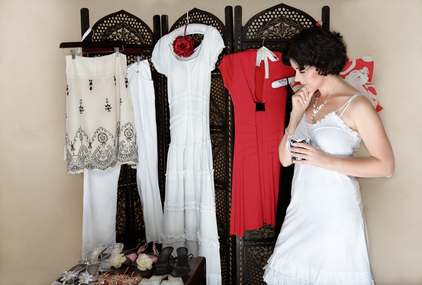 Several years ago, a friend's parents retired, sold their house, and bought a sailboat.

They — we'll call them Dave and Karen — sailed around the world (quite literally) for years. Although I get seasick just looking at a boat, I couldn't help but be envious.

Anyway, a few years after they'd been "living at sea," they'd docked for a long summer back at home. This was, in part, because my friend (their son) was graduating college.

One night, I'd stopped by the boat looking for him, but he wasn't there. Karen asked me if I wanted to come inside and wait, but I said that wasn't necessary. I was just in the area and thought I'd pop by. Still, Karen insisted, saying she could use the company.

I think Karen just wanted help cleaning the boat, though, because guess what we did waiting for my pal? ;) I didn't mind. Honest. I found Karen (and Dave) so fascinating that I'd have scrubbed the floors just to be around them and hear their stories. (Thankfully,  Karen did not make me scrub the floors).

I realize now, that Karen (and Dave) started me on my minimalist path way back then — I just didn't know it.

Although their sailboat was pretty big (in terms of sailboat sizes), the living space was a tiny apartment, at best. I remember asking Karen where they kept all their "stuff." I thought about all the contents within my parents' house — heck, just the contents of my teenage bedroom, and wondered where I'd put it all in the boat!

Karen explained that there were a lot of "sneaky" storage places in boats. For example, if I lifted up the couch seat I was sitting on, I'd see that there was storage under the cushions. Then she said a lot of goods have multiple uses. For example, they stored their wine bottles in socks. I remember thinking Karen (or Dave — who ever thought of this) was a genius. Still, there wasn't that much storage, so they really had to get down to the bare essentials.

Until that point, I'd never really considered what was "essential" to me. I also never really thought about the difference between "want" and "need." Of course, it would be years before I became a minimalist and truly began a journey with these thoughts, but Karen definitely changed some perspectives for me that day.

Back to the story: When summer was over, several of us got together to help Karen and Dave set sail. When I walked down the dock, I saw that they were both carrying several bags off the boat. I offered to help — asking if I needed to take the bags to the trash area or the recycle bin. Dave told me it was going to Goodwill, so put it in the car. "But don't you need this stuff?" I asked. Karen said, "I don't understand it. Every time we stay at port for a while, we accumulate all this crap. I don't know how this happens. I really don't." After all the bags were off the boat, Dave even joked that the boat came up two inches in the water, so as to say all the added stuff was really weighing the boat down.

Karen, meanwhile, was still worked up and going on and on about how annoying it was that they accumulated stuff they didn't need and it had to stop. She was sick and tired of doing these big purges and cleanings every time they were leaving someplace. Finally, Dave said, "Well, next time we stay someplace for a while, every time we bring something in, something else has to go out." That was the rule.

And it took me a good decade before I started practicing it myself. But it's a rule my inner minimalist lives by.

Right after our first big purge, I thought of Karen and that day on the boat. I also thought about Dave's rule. It made perfect sense to me now. If one thing went out when one thing came in, it would be impossible to accumulate because I'd stay exactly where I was currently in terms of "stuff."

With the exception of food, we follow this rule. I usually try to remove a similar item. For example, if Scott buys a new T-shirt, he donates an old T-shirt. This isn't always the case, but it's what we try to do. Not only has this helped keep down the accumulation and clutter, it has saved us money.

I remember looking at a pair of pants in the store recently. I really wanted those pants... but then I started to think about the pants I already own and what would I get rid of? Then I thought about my skirts, too, because I didn't want to get rid of any pants. Before long, I realized I didn't really need the pants and then I didn't really want to spend the money on them, either. What a change a short pause made! In an old life, I'd have bought them without a passing thought.

The hardest, of course, is birthdays and holidays, when Scott and I are given gifts by our family members and friends. We love the gifts we receive, and sometimes it's hard to find something to get rid of, but we always do... and sometimes that item is an old ink pen... we're not perfect ;) but I really do love this rule.

If you're looking to live a little more minimalist, the "1-in, 1-out" rule is a great (and fairly easy way) to get started!