Herbies of the Week: Marissa & Nick 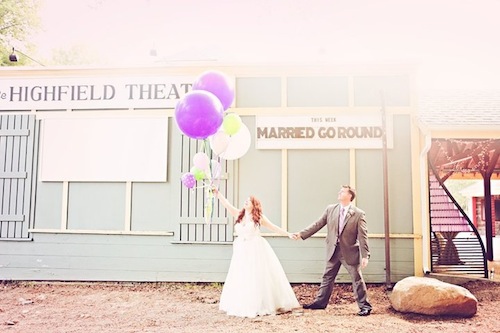 This week we've got two Herbies of the Week; the Newly Vegan Newly Weds, Nick and Marissa. Marissa helped Nick make the switch to a plant-based diet after he said he initially acted like a "10 year old throwing a tantrum because his PlayStation was taken away."

Q: Please give us a little history about yourselves? Marissa: Nick and I met 13 years ago doing summer stock theater in Falmouth, Cape Cod MA. We both moved to New York shortly after and stayed friends for 10 years. Nick: One night in May of 2009 we went out to dinner together, neither of us knowing if it was a date or not.We had always been attracted to each other but timing had never been quite right. Needless to say that was our first date and we were married two years later.

Q: Did either of you have any medical issues before going plant-based (vegan)? Marissa: Nick has a history of heart problems, and we both have family history of diabetes and cancer. We want to live long happy lives, have kids, and be successful. Our current diet was not doing that for us.

Q: What helped you make the choice to become plant-based? Marissa: I watched Forks over Knives a little over a month ago and I was so excited to share it with my husband Nick. Nick was not exactly open to the idea. He lived off a steady diet of cheeseburgers, mozzarella sticks, buffalo wings, bacon and eggs. In fact when I decided to tell him I was off meat he was eating fish sticks. It was not the best timing and we actually got in a huge fight.

The next day, while Nick had some downtime at the theater, he watched the movie. He came home later that night and said "Don't say I told you so." He then started cleaning out the fridge and cupboards of all animal products. It was a miracle!

Nick: I had such a resistance to giving up meat because it was such a "man's food." Plus I think most people are very uptight about the idea of giving up something and never having it again. I think it's part of our mindset as Americans to have absolute freedom of everything, including food. And believe me, NO ONE loves food more than this guy.

Q: If you had any medical issues before, have you noticed a difference in them since the change? Marissa: We both feel healthier and more energized. Nick has only had one heart episode since and it was much shorter in duration. We also both noticed that we really have no cravings for meat and dairy. We both were getting to the point with our diet before where we were constantly craving and binging on foods that were not healthy for us.

Nick: The crazy thing for me is that I don't really have the same relationship with food anymore. Food, with all of it's beneficial and possibly harmful qualities is a very powerful thing. I am finding it's okay to have respect for both its good and not so good powers. But for the first time in my life I feel I have control over it and most importantly, I don't feel deprived of anything and I actually can tell when my stomach is full. For someone who has had a weight problem my whole life, I simply can't argue with that result of this lifestyle.

Q: Have there been any other changes as well? Marissa: We started distance walking. We started with the bridges around NYC. The George Washington Bridge is right by our apt so we started there. We walked a few more and then I started walking Nick down to his theater at night which is a little over 8 miles. We decided to walk around all of Manhattan (32 miles!) the week before our first anniversary on May 29th. We're up to 15 miles now and it's been a real bonding experience that we could have never done on our old diet.

Q: Nick, you ate out a lot before going plant-based. Do you still eat out as much? Being in NYC, it must be easy to find lots of options.

Nick: Oh yes. One of the well known joys of New York is the food. You can find every type of food from every culture in the world, and luckily for us vegan-friendly establishments are abundant and definitely growing in popularity. We primarily make our own food now because you can't always be sure to get what I call "clean food" (no animal products of any kind) in all places. But when we do go out we are trying more and more strictly vegan restaurants that have just been incredible.

Marissa: NYC is an amazing place to be a Vegan! We love Peace Food Cafe, Blossom, Kate's Joint, Uptown Juice Bar, etc. Babycakes NYC is heaven on earth! Nick is in love with their carrot cake. We're pretty spoiled. There are also a lot of options for grocery shopping. We love Trader Joe's, Fairway, and Whole Foods.

Nick: My vegan transition was made so much easier by an amazing product called Trader Joe's Meatless Meatballs. I would say for the first two weeks of this lifestyle I was eating meatball sandwiches almost every day. They really taste like real meatballs. Baked fries were also common on those first two weeks, and slowly I started feeling more inclined to eat more vegetables, fruits, nuts and legumes. I felt like I could still have parts of my favorite "Pub Foods" as I call them, but without meat.

Q: Marissa watched FOK first and Nick, you didn't want to make the change at first. What made you decide to watch the movie? Nick: I acted like a 10 year old throwing a tantrum because his PlayStation was taken away! I wanted no part of it. But almost a year ago I married the most incredible woman in the world, and she is more important than any steak or mozzarella stick. She was passionate and excited about it and she wanted to share it with me. I felt bad about the way I reacted. I decided to check all my preconceived notions about vegan-ism at the door and just watch the documentary. I was shocked and stunned about how much it affected me on a personal health level. I also started thinking about growing old with Marissa and how we'd like to live a long life together for us and for our children. She also loves me very much, and wants me to be around a long time. That meant the most to me. I often come to the realization that Marissa is extremely smart and usually right about most things. Men, listen to your wives and you will be a lot happier! 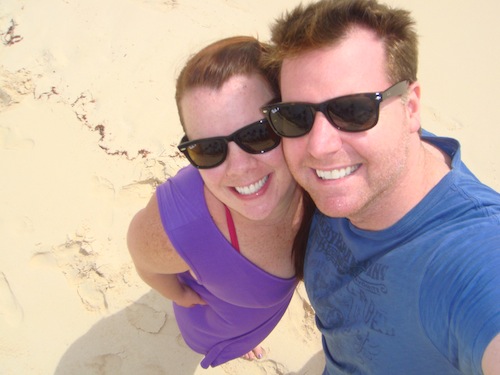 Q: Any additional advice for other couples thinking about making the switch? Marissa: I think it's one of the easiest things you will ever do. What better way to say you love someone then to live a healthy lifestyle with them? Thanks, Marissa and Nick for sharing your story! You can all check out Marissa in her latest play,Do Me a LIttle, which is premiering at the New York Fringe Festival.