Herbie of the Week: Monica 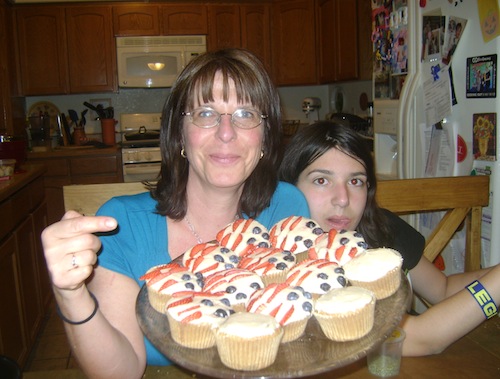 Meet Monica, our Herbie of the week! Monica is a plant-based mom, who was even plant-based during her fourth pregnancy! She's talking to us about raising a plant-based family. Thanks, Monica!

Q: Please give us a little history about yourselves?

My sister-in-law and my nephew became vegan (eating a lot of vegan "crap", though!) around 2005 and I, like many others, were pretty skeptical of their choice, even though I had always struggled myself with the ethical implications behind eating animal. Overtime I became curious, I did some research and read somewhere that a vegan diet can help with headaches and migraines, which had plagued me since I was a little girl and had increasingly gotten worse as I got older. So I got myself the "Vegetarian starter kit", and one Saturday in February 2006, during lunch, I announced to my husband and then 3 kids that I would stop buying and cooking any kind of animal products, only exception was cheese, because my husband and my daughters still wanted to have a cheese pizza, and I explained the ethical reasons behind it. They just accepted my decision without much complaining.

Q: How did your family deal with your transition? Any resistance?

The girls, age 7 1/2 and 5 1/2 at the time, didn't put up much resistance like I said, they just understood that we were going to eat food that would't involve hurting animals, and they were perfectly fine with that. To make the transition more acceptable to them and to my husband, I conceded that they could have mozzarella on their pizza and parmigiano on their pasta, and ice cream occasionally, like when we travelled. Our son was almost 12 and wasn't completely sold on the idea, BUT he accepted it too. I told him that if he wanted, he could eat whatever he wanted when he went to other people's homes, but he mostly stayed vegan/vegetarian. For the longest time I considered him a "reluctant vegetarian", until an incident last fall when he went to a HS game with a friend and had a burger and the following day he got sick an, after telling me what he did, he swore he'll never eat meat again. So now he's 99% vegan, as he uses parmigiano on his pasta when we eat out.

My kids had always been picky, so being plant-based added one extra layer to the food they don't eat; they know now how to ask for something plain when they're in a situation where there's food they don't want to eat. When they stay at a friend's house for a sleepover, they sometimes only eat plain pasta or just bread, that's ok with me, because they eat a good diet at home.

Q: You mentioned you were pregnant and plant-based, can you tell us about that?

The fourth pregnancy happened 2+ years into eating plant-based, and I was also over 42 BUT it was by far the best pregnancy of the 4! Eating a good vegan diet, I was already getting all the nutrition needed, but I also took pre-natal vitamins (vegan ), since I did it for the other 3: every blood work, every test I took was perfect! The most amazing "side-effect" of the vegan pregnancy was that, unlike during my other pregnancies as an omnivore, I didn't suffer from constipation at all!! And you don't understand the HUGE benefit until you remember how being constipated during pregnancy leads to painful hemorrhoids, and that after giving birth being able "to go" without straining etc. is a fantastic bonus (is this TMI??) I should also mention that my OB was totally supportive of my eating lifestyle and that it is important to have someone who wouldn't criticize or harass you throughout the pregnancy.

Have you run into any problems with having children who are plant-based?

Sometimes having children who don't eat the typical American diet can create some problems, as in the case of birthday parties or sleepovers, but in those instances I do try to ask what they're going to serve and offer to bring something similar for my kids, especially the youngest one who can;t speak for herself, yet. This Sunday, for instance, my 2 year old is going to a birthday party of a little friend and I just emailed the Mom asking her if she'll have cake or cupcakes so I can bring something similar. Sometimes the hosting family tries to accommodate our choices, and that's really a sweet gesture, but we don't count on it. As far as school goes, they always bring their lunchbox with the food they like (American cafeteria foods is not exactly good, regardless of anyone's dietary choices) and sometime they share with their friends their vegan "stuff", and that in turn sometimes generates questions and conversation. Our son, in high school, gets occasionally some grief about being vegetarian/vegan but I think that there are so many people who are either allergic or intolerant to so many foods, that being vegetarian/vegan is not cause for big problems. Perhaps just curiosity.

Has your decision impacted any of your other family members?

I was born and raised in Milano, Italy, and I came to the United States in 1993 when I was 27, because I was in love with the (American) guy who was going to become my husband. In Italy we eat all sorts of animals and animal products (and if you've ever strolled down any Italian supermarket aisle, you know what I'm talking about!), but I have always felt the duplicity behind that lifestyle, some animals are more worthy of compassion and love than others.

Veganism in Italy is still mostly an ethical choice, but since The China Study has been translated and more information about the huge health benefits of eating a mindful, whole food, plant based diet are crossing "the pond", I noticed an increase in interest in the vegan choice. I am trying to get my parents to eat "the right way", since my Mom had a mild heart attack 3 years ago, but being that I'm so far away, it's not very easy, and I hit the usual "it's not what we eat in Italy" excuse, the "the doctor told me I need to eat some prosciutto" excuse.. it's very frustrating. I read Lindsay's parents improvements since they also started eating right, and I hope one day my own parents will make the switch! Thanks so much for sharing your story with us!

UPDATE:A year later Monica checked in with an update. Read her progress here.