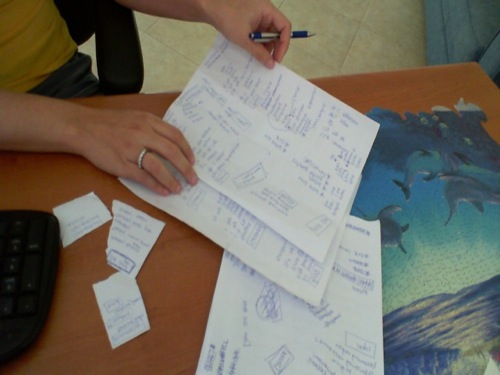 I've had a really bad case of the delays. There have been a few projects I've wanted (and needed) to start -- like writing another cookbook, and each week I've told myself "I'll start on Monday" after.... [long list of reasons]

Then Monday came and some other, pressing things came up and I didn't start and I started to tell myself "ugh, okay, I'll start next Monday. Seriously, right now I need to do this."

But I know what's going to happen.

I'm really good at procrastination. You should have seen how clean my apartment was in college and law school during finals. And because I'm the kind of procrastinator that procrastinates doing one thing by doing something else (and thereby justifying my procrastination).

I mean, look at me. I've procrastinated through an entire month! HOW did that happen?

It all dawned on me when I was watching an episode of The Real Housewives of OC at the gym (please don't judge me too harshly! I know! I can't help it!). In the episode, Gretchen was saying she couldn't move forward with her boyfriend, Slade, unless he got some things done -- things he'd been telling her for three years that he'd get done (but hadn't). Slade responded that he wanted to get things done but he was constantly distracted -- Gretchen was the distraction. Life and the day-to-day was a distraction. The therapist suggested he made "Slade time" each day -- no distractions from 10-2, that was his time to focus on getting the things done he needed to.

I thought about all the things I wanted and needed to do, but somehow never seemed to have time for. I've wanted to learn how to knit for 5 years. I know I'm busy, but seriously? Surely there was 30 minutes in there somewhere to take at least 1 lesson. I thought about how I wanted and needed to practice my language skills. Call my sister. Send out wedding gifts. Organze my files on my computer. (I could go on and on).

It was a break-through for me.

I thought back to my MM post about single-tasking (as opposed to multi-tasking) and I thought about Slade. How much of my time each day was lost in the day-to-day life. How was life in general a distraction? How could I be more focused in my life? How could I get more done?

Basically, how could I live a minimalist "life"? I wrote down all the things I HAD to do each week: laundry, grocery shopping, various household chores, exercise/yoga, business/job stuff (i.e.create new meal plans). In the end, the list wasn't as long as I expected and truthfully some of the stuff (like yoga) I didn't HAVE to do, but I knew I should to be at my best.

Then I figured out how many hours a week these "musts" required of me, and I was surprised to see so much time left over. Where was it all going? Was I wasting it plugged into my email? I really had no idea. I wasn't sitting around leisurely, that's for sure -- but I couldn't really put my finger on where it went. Like Slade, life had been a distraction for me.

So, I took Slade's therapist suggestion and started scheduling an hour of "me time" - time that was specially dedicated to getting the things done I needed to get done. After a few days, I increased it to two hours, and on the weekends, three. It amazed me.

I had streamlined my life. I'd become more minimalist in my day-to-day. I was doing what matter, doing what I needed to, not wasting my time being distracted (and clearly, I was so distracted! Though I was also in denial about that).

I'd done with my time what I did with my money (see post: )

I urge you to set aside some me time, even if it's 30 minutes, and get minimalist with your day to day.