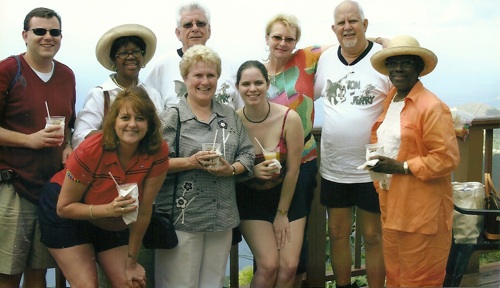 Here is a testament that Courtney & I are related: I sat down to write a post about keeping in touch with old friends when Courtney shared the following post with me (without knowing I was writing the same thing!). I love the point she made, and took it to heart.

All relationships are a 2-way street, it doesn't matter if it's a friendship, kinship or romantic relationship - you both have to work on it. This is something I have learned, and learned it the hard way, not personally but through a friend.

I think back to that day 6 years ago when my Dad died, and those phone calls I was making. There is one conversation that still sticks out in my mind. It is one I had with one of my Dad's best friends, and he actually called me - he was on my list to call, but someone whom I had spoken to earlier already called him.

I can still hear his voice, and the pain in it to this day. He told me a story about the last time he spoke with my father - how my Dad, while not upset with him, was getting on to him about how he never calls and how my Dad has to be the one to call him. My Dad even said he wouldn't call him again, and the friend promised that he would call first next time. I don't know when that conversation took place, but I knew it had been a while and that he never did call. And he regretted it.

That's a regret I don't ever want to have. Life is never too busy for you to catch up with someone you care about - even if there is nothing new to talk about. I'm not saying every friendship (or kinship, for that matter) needs attention, but that you shouldn't neglect the ones that do.

I admit that I have been really bad about this, especially living in Colorado when all my family and friends are back east. I'm busy working, and when I get done it's too late there to call. We all can get so caught up in our daily lives, that we lose touch with those that we care about thinking there will always be time later to do the catching up. What happens when there isn't a later? Why do we think we need to have a good time to call someone? Now is as good of a time as any.

Although, my Dad's message to his friend was more than just that - it was also not to let your relationships be one-sided. You see, while my Dad had been the one to initiate their last several phone calls, he was telling his friend that he felt neglect and like he wasn't a priority, since his friend never called first. I think this may have led to a big part of the regret too, because I know he did care about my Dad.

I just realized this about a friend of mine in the last 2 months. I realized that I was the one who always was initiating the conversations, and it was starting to feel very one-sided. It appeared that I was the only one who thought the friendship was important, and one of the last things I heard was 'I'll call you tomorrow'. I haven't called nor texted, and haven't heard anything since.

While this may be what my Dad did with his friend, I know that at least I will not have that regret because I tried - am trying. I call my grandmother more often, and see my aunt when I can. It's these things that I want to remember, not the regret of 'I meant to call more' or 'I'm so sorry to hear that she passed, I was planning to call her tomorrow'.

Planning to call? Why do you need to plan to call someone. If they are busy or it's a bad time, they will either tell you or you will get their voicemail. Either way, at least you tried. Pick up the phone (or start writing that email) and make sure you are doing your part in the relationship - that way if something does happen, at least you won't have any regrets.

And that is the spirit of this Minimalist Monday - minimizing regrets.