How a Vegan Diet Saved this Dog's Life 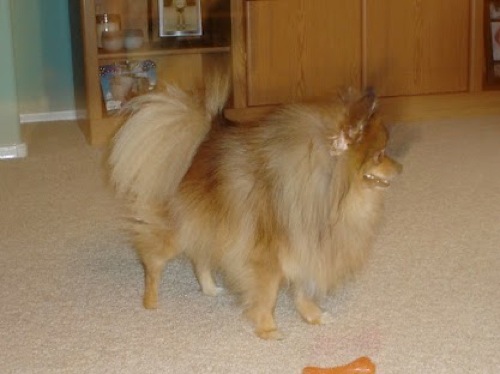 A few months back I wrote a post about how my dogs are vegan, and Michelle, sent me a few pictures of her dog, Peanut, along with a note of his troubles and how switching him to a vegan diet saved his life. Here is their story.

Peanut D. Dog came with a long list of problems. When I took him home, he came with a pre-scheduled veterinary appointments and a tube of medication. Even though there were red flags everywhere, I was too hypnotized by his beady eyes and all of his Pomeranian fluff to notice them. Peanut became a priority to me.

It didn't take long for me to realize Peanut was going to make a hefty dent in my wallet. He was loud and demanding, and his favorite activities included: pulling dirty laundry out of the basket (then eating it), gnawing through every wire, and ripping up the carpet. He also managed to clog his stomach with kitty litter, scratch his cornea (three times), and poison himself with some sort of mystery chemical he gobbled on a walk.

Our frequent trips to the vet began to reveal that something beyond his incorrigible personality was not quite right. Blood tests indicated elevated levels of liver enzymes, joint checks unveiled instability, and his hair was labeled "coarse".

By his first birthday, Peanut's behavior had (slightly) improved, but his body was quickly declining. He required surgery on both of his back legs, suffered liver issues, and endured random intervals of lethargy and grumpiness. But most disconcerting was his unwillingness to eat actual food. Even table scraps didn't seem to interest him. After frustrating attempts at hand-feeding him and playing games with food failed, I would usually end up force-feeding him blended dog food with a syringe. 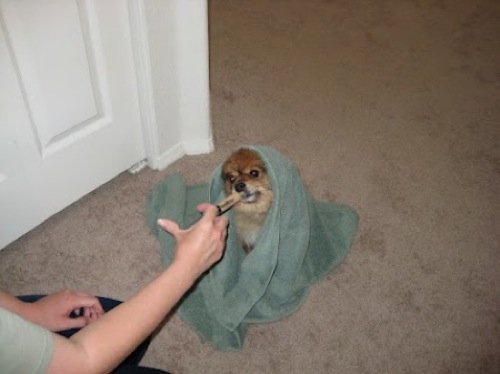 I took Peanut to many doctors and got very little advice. I tried remedies like milk thistle and melatonin, and while they helped to a degree, they were simply bandages on a larger problem. Obese, sick, and arthritic, Peanut was dealt one last insult--he began to lose his hair.

At first, it was just a clump here or a spot there. But within a year, he was totally nude and wearing a sweater. It wasn't until Peanut stopped eating completely, going so far as to viciously attack my hand when I offered him food, that I realized he was dying.

I was fortunate enough to find a vet who was able to decipher Peanut's main health problems. He had severe Irritable Bowel Syndrome, or IBS, and Atypical Cushings Disease, which is an imbalance of sex hormones. She prescribed harsh medication and oral steroids, along with a strict diet of cooked potato, salmon, sea salt, and All Bran cereal. The change in Peanut was almost immediate. He began begging for food, going on walks, barking incessantly, and destroying my house. He even ate some paper towels and had to be hospitalized. Things were looking up. 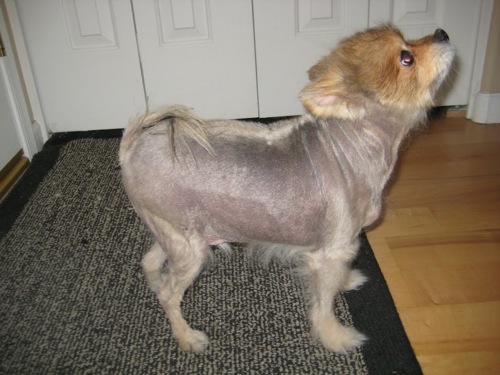 Not all was perfect, however. If Peanut did not have his daily steroid, he would spend the day huddled in bed, growling at anyone who dared walked by. His medication and diet were merely life support, but was not addressing the source of his issues. His bald round figure was a constant reminder that something was still wrong.

About that time, my dad began having severe health issues. Already having suffered through two heart attacks, five by-passes, and several stents, he was out of second chances, but there was one more chance, however, and it was Dr. Caldwell Esselstyn, Jr. My dad immediately flew to the Cleveland Clinic for his life-saving advice, adopting Dr. Esselstyn's plant-based diet that very same day.

One day, my dad mentioned in passing that his hair stylist thought his hair felt thicker. With his words ringing in my head, I gazed at Peanut's flaky skin, and the source of all of his misery finally revealed itself to me. I quit cooking his IBS food and instead served him a small amount of salmon-based prescription canned dog food mixed with greens (kale, mustard, collard, and turnip greens). I let him snack on fruits like strawberries, watermelon and whatever else we had available that isn't known to be poisonous to dogs. He also got a hefty portion of steamed vegetables, such as broccoli, cauliflower, bell peppers, etc. 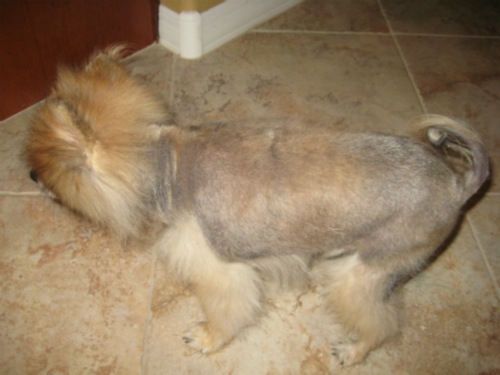 After feeding Peanut the diet for six months, I noticed that his legs looked hairier. There was also some unmistakable stubble on his back. Encouraged, I gradually weaned him off of all of his medications, including the steroid he had been unable to live without for the past four years.

Two more months went by, and suddenly, Peanut looked like a Pomeranian again. His hair was thick and still growing, but unlike the hair of his youth, this was soft, shiny, and free of dandruff. His weight was ideal for his size, his bowel movements were normal for the first time in his life. He pranced around my house, barking and yapping his demands all day long, wreaking havoc wherever he saw fit. At ten years old, Peanut is the healthiest he had ever been. 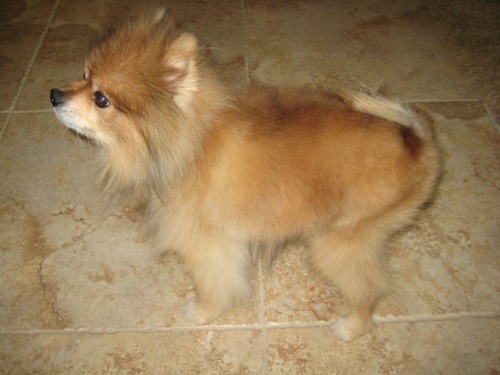 People frequently ask me if it is healthy for a known carnivore to have a 95% vegan diet, all I can do is show them the pictures.

Thank you Michelle for sharing Peanut's story with us. It is a miraculous tale and I'm so glad you were able to discover the source of his problems.