Herbies of the Week: Tina & Stella 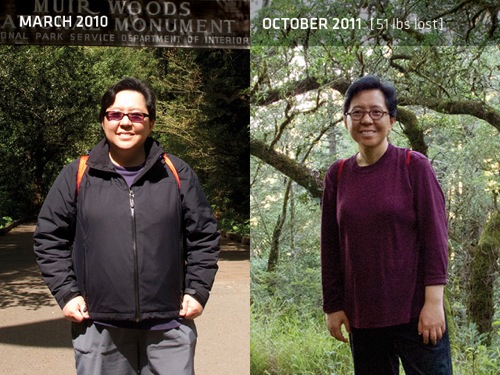 This week we have not just one but twoamazing Herbies! When we set out to interview Tina, we found out her partner, Stella, had an amazing story as well. These two beautiful women have lost almost 100 poundstogether while reversing all of their medical conditions naturally -- Tina even quit a 25-year smoking habit cold!

During the interview, Tina shared this quote -- which sums up their story nicely:

"You can't keep one disease and heal two others. When the body heals, it heals everything." --- Charlotte Gerson, in the film Food Matters

HH: Tina, how did you and Stella find your way to a plant-based diet?

The shift to a plant-based diet was a gradual one for Stella and me. While we were on vacation a year and a half ago, Stella developed an itchy rash on her right shin. Three months later the rash had become much more severe. Stella suspected it was a reaction to something she was eating and did research online. Her finds seemed to point to a gluten-sensitivity.

Over the next 5 months we gradually simplified our diets--- first we eliminated gluten, then refined sugars, processed food, then dairy products.

HH: You changed your diet as well?

I decided to change mine too as it was more complicated to maintain two separate diets in one household.

HH: I understand why you cut out gluten -- Stella has a sensitivity, but what promoted you and Stella to also drop animal products... and stick to plants?

We watched Food Matters. We read Eat to Live and The China Study. In the end we committed to eliminating all animal products from our food. Though Stella's rash improved in some areas, it lingered, and got much worse, in others.

HH: That's awful! Did Stella's rash ever improve or go away?

It was only about three months after going completely plant-based, combined with coffee enemas to aid in detoxification, that her rash went away. And it healed completely without the use of any pharmaceuticals.

HH: Wow! That's Amazing! Have you or Stella experienced any other positive benefits?

Many other unexpected changes occurred. Stella has lost 54 pounds.Her total cholesterol dropped 52 points.Stella no longer has pain in her joints and her seasonal allergies are completely gone. She also says that her ability to focus and think clearly has vastly improved.

HH: And what about you? Any positive benefits?

I have lost 36 pounds and lowered my cholesterol 48 points. I was able to get off asthma medication that I had been taking for four years. The headaches that I used to get regularly are now few and far between. The acne that never really went away from when I was a teenager had cleared up significantly. I was able to quit a 25-year smoking habit cold, with hardly any withdrawal symptoms.

Neither of us has gotten sick at all this year.

The physical changes have been amazing! This way of eating has given us an incredible feeling of abundance and wellness, and a much more positive outlook on life.

We feel like we now have control over our health, and the confidence that as we grow older, sickness is not an inevitability.

HH: You and Stella are lucky to have each other for support, but what about friends and family -- are they supportive of your dietary change?

There are a select few that have been very enthusiastic and supportive. Many are lukewarm and seem to not want to hear very much about it---some have actually distanced themselves from us or been downright negative. This has been hurtful and disheartening but part of the learning experience has been realizing that sometimes the best thing is to not talk about it, to just live your life and try to set an example. Food is such an emotional subject for many people.

HH: What keeps you and Stella motivated?

We keep a picture diary to document our day-to-day--- looking at the results/improvements over time helps keep up motivated. We seek out others' success stories for inspiration. We watch documentaries like Forks Over Knives and follow sites like Happy Herbivore, PCRMand Nutrition Facts to continue to learn and remind ourselves WHY we've committed to this lifestyle. We are very excited about attending the Engine 2 Immersion next July. 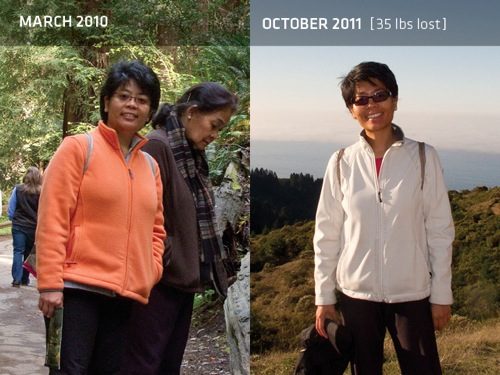 HH: Any other advice?

The solution is almost inevitably "simpler is better." This has been such a valuable lesson for us.

To those who are considering a change but are thinking "I could never do that" in a past life I was a fast food junkie who would actually say, "I don't do leafy greens." Daily breakfast used to be white bread, cheese, with two eggs, and my go-to meal usually involved a bucket of fried chicken or a can of SPAM. Never say never. A change for the better is possible with an open mind and the right motivation.

HH: Thanks Tina & Stella -- and congrats on all your amazing health accomplishments!