Minimalist Monday: How to Cook without a Kitchen

Today's Minimalist Monday post is from our friend Genevieve. Her story (and apartment) is incredible. She lives in a 105 square foot apartment- with no kitchen, and cooks full meals on a hot plate.

“I live alone so it's easy for me. I also simplify it more because I eat the same thing for lunch and dinner for a week at a time. I cook for the week on Sundays.”

Cooking for me is a bit of a triathlon, combining several of Lindsay’s experiences into one: a small NYC apartment, only having one pot/pan/burner at my disposal, & the minimalist idea of cooking for an entire week all at once. Also, I only have a mini fridge, live alone, and am on a fairly strict budget. I also live in an apartment that’s only 105 square feet :)

Living in NYC there is food temptation all around you, and it’s frighteningly easy to say, “Oh, I’ll just grab something from Delmonico’s for lunch today.” Halfway through my salad the guilt kicks in over how far the $10 I just spent would have gotten me at the grocery store.I feel most centered when I know that I’m being responsible with my money and my eating in partnership, so that translates to some well though-out meal planning, a trip to the grocery store, and a few hours invested in the “kitchen” on a Sunday afternoon. 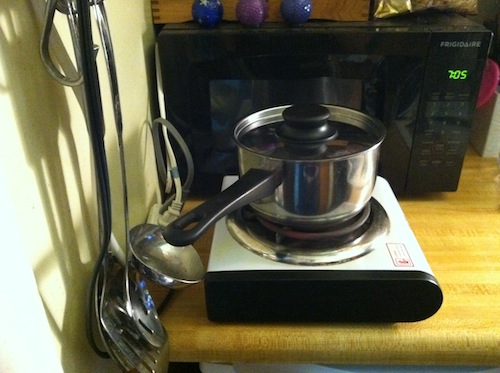 My “kitchen” consists of a hot plate, a toaster oven and a microwave. I can only use one appliance at a time, because my building is super old and if I try & run two, I blow a fuse and have to re-set it & start all over! I should also point out that I don’t have a kitchen sink. I just have a mini one in the bathroom, which leads to me doing my dishes in the shower (I know it sounds crazy, but for my living situation, it’s actually highly efficient!). 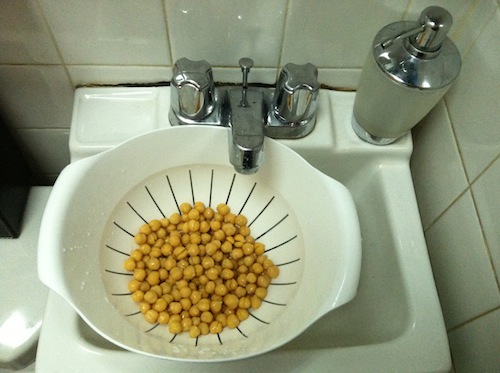 While I do like variety, in the name of monetary- and energy-efficiency, I am happy to have the same thing for lunch and dinner for a week. Now this particular week’s meals didn’t pose as much of a cooking problem, but if I’m doing something like eggplant parmesan, chili, or a soup, things can get pretty hairy. So, like Lindsay, I tend to turn the TV around to face the ‘kitchen,’ pop in my favorite work-time DVD, & get to cooking! 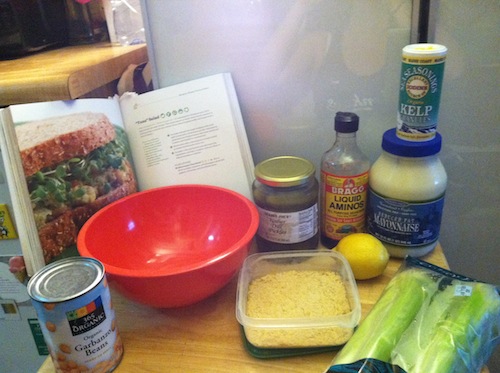 I pre-cook my onions & green peppers & throw them in a Tupperware container so that in the mornings, I can just reheat them in the pan with the tofu & seasonings. I also drain my tofu while I’m cooking, slice the block into fifths & throw it in a ziplock baggie so that it too is ready to grab each morning. Next up I pre-made the filling for the mock tuna salad & put that in a Tupperware for the week as well. Each morning I just load some up on bread, wrap it in foil & throw it in my bag! I also pre-made the cauliflower to reheat each night, which I do using the microwave. I know it’s not the best option out there, but when you wash your dishes in the shower, if you don’t absolutely have to dirty a pan, you don’t. 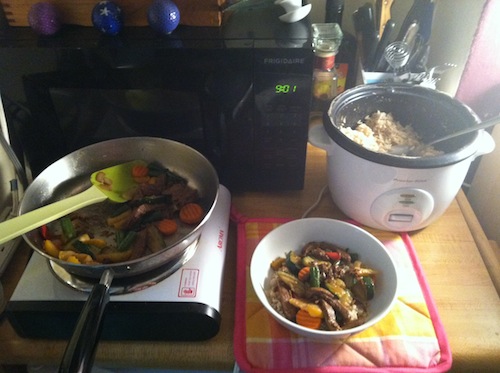 For my dinners, I wanted to make a stir-fry dish comprised of jasmine brown rice, Trader Joe’s beef-less strips, and mixed veggies. To make this dish I have to cook each component on its own, starting with the rice. I have a small rice cooker, so I started by setting that to cook and then busied myself with other chores until it was done. After that I swapped the rice cooker for the hot plate, and browned the beef-less strips. Setting those aside, I used a small pot to heat up the frozen mixed veggies (yes, fresh would be preferred, but for the size of my fridge, cooking for one, and my budget, frozen made more sense here!), which I then added in to the beef-less strips with some Bragg Liquid Aminos and ginger powder. This dinner, stored in Tupperware, can last me for three nights of meals. 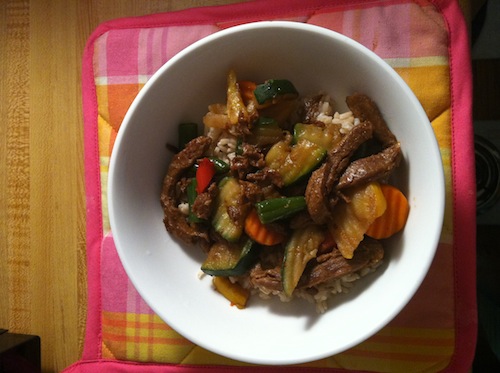 I think my favorite ‘cooking’ activity on Sundays, in terms of setting myself up for the week & saving money, is making the coffee! I love iced coffee and for some reason, when I first wake up in the morning my body isn’t quite ready yet to have a hot beverage, but I also don’t like the idea of spending $4 every morning at Starbucks. My solution (thanks, mom!) was to buy a small glass pitcher that would fit in the door of my mini fridge, and make a pot of coffee on Sunday night to have for the week! I let it cool down on the counter while I’m doing the rest of my cooking, & then throw it in the fridge before bed and voila, come Monday morning I have a tall glass of iced coffee to chaperone my morning ministrations.

While I definitely wasn’t seeking out this tiny style of living, I have embraced it and come to really appreciate the simplicity it has brought to my life. Knowing that I am able to eat well, though simply, while minimizing food waste and sticking to a modest budget, gives me a calm base from which to go about my week’s responsibilities.

One of the first things that people ask when they see my apartment is, “so you must eat out all the time, huh?” And in looking at articles, posts and videos of other small NYC apartments, one thing that really stands out to me is the lack of cooking space. Even though my apartment IS miniscule with no dedicated ‘kitchen’ area, I decided to make cooking a priority for me, and found ways to make sure I could be in control of my eating. As long as I have one outlet, a hot plate, and room to store one pot, pan, plate, bowl, etc… I’ll be able to cook in my mini apartment. Oh, and even if you don’t have a kitchen sink, remember that you can always do your dishes in the shower… those corner shower caddies double nicely as a dish rack!