Today's guest blogger is my pal Czech Vegan! We met on Twitter and became insta-friends. One of the things we bonded over was our love for dogs so when Elisabeth told me she was making HH cupcakes for her pup Shelly, well, I smelled a guest post!

Let's Have a Dog Party! 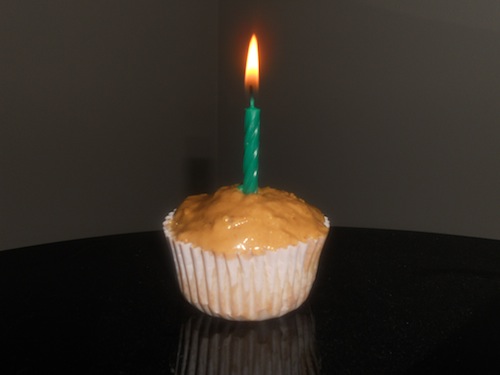 Elisabeth: My English Cocker Spaniel Shelly was celebrating her 9th birthday recently, and what would a birthday be without a cake, or in this case a vegan cupcake?

I made Shelly's cupcake using the strawberry cupcake recipe from The Happy Herbivore's cookbook (page 216). I followed the original cupcake recipe for me and my husband, but for Shelly I left out the lemon zest. (I scooped out one cupcake for her before I added the lemon zest to the rest of the batch.)

To make Shelly's cupcake more interesting and doggie friendly, I frosted the cupcake with her favorite peanut butter instead of vanilla frosting and strawberries. She went for the frosting first, of course :-) 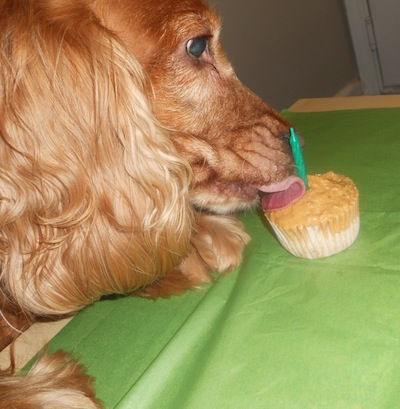 I had to unwrap the cupcake for her because she was getting ready to eat the cupcake with the paper on, it was that good! My husband and I enjoyed our strawberry cupcakes and ate the entire batch within two days......... I love Happy Herbivore's strawberry cupcakes, they are so easy to make and taste amazing! 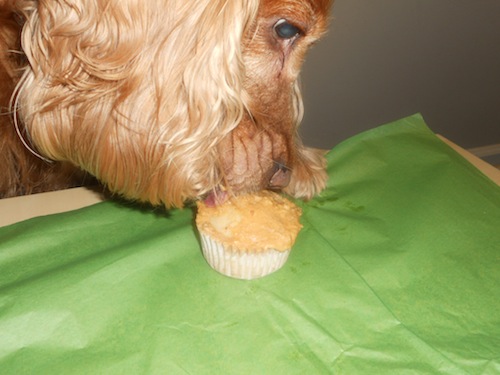 Cupcake Baking Tip from Elisabeth: When I made these cupcakes for the first time, I made a mistake and over-stirred the batter resulting in doughy and dense cupcakes. I learned from that mistake this time and only stirred the batter until just combined (as the recipe directions suggest). The cupcakes came out much better this time!

A little bit about Shelly: I got Shelly in Prague (Czech Republic) when she was only 2 month old. I moved with her to the USA six years ago. She is a very special dog. She is a very sweet girl, very affectionate and well behaved. She loves people and our three kitties.A fun thing about her is the fact that she is bilingual :-) She understands commands and words in Czech and English. Like Lindsay's pugs, Shelly loves fruits and veggies. Some of her favorite veggies and fruits are apples, carrots, zucchini, blueberries, peas, green beans, bananas, cucumbers, and sweet potatoes. 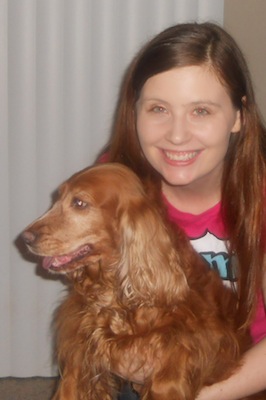 While most people have to force their dogs to eat veggies, I have to hide veggies and fruits from mine! One time when Shelly was about a year old, I was cleaning my fridge and she stole a giant cucumber and ran on the balcony with it. I did not notice it at first but when I realized that something was missing in my fridge I looked up and saw Shelly chewing on a cucumber as if it was a bone. She loves peanut butter and when I say the words Peanut Butter she starts licking her lips and walks over to the kitchen.

HH: My pugs are definitely envious of Shelly right now---even though they get HH's Carrot Cake Cupcakes on their birthdays (they're c-c-c-crazy for carrots!). Thanks for sharing your birthday with us Shelly!