Minimalist Monday: How to Declutter and Prevent Stockpiling

The deeper I dive into minimalism, the more I realize I've always had an inner minimalist trying to push her way out.

About two years ago I adopted the practice that something new must truly replace something old. That is, every time I buy something, I have to get rid of something else.

This all started when Scott's T-shirt collection was getting a bit out of hand and I told him for every new T-shirt he buys, he has to donate one he already has to Goodwill.

Scott wasn't thrilled with my new rule and asked if it applied to me too. At first I resisted, noting that my clothing situation was under control but I ultimately accepted the rule is a good rule and I should follow it too. So, the rule applied to all clothes, though we allow for some flexibility.

This practice helped keep our closet under control, but I noticedit didn't prevent stockpiling in other areas.

Books, DVDs and other media were exempt from our "out with the old" rule. At first it never occurred to me that I should cycle them out as well. I mean, these items are an exception, right? because I still use and reference books and I may want to watch that DVD again?

When our once mostly empty bookshelf started to overflow, however, I took a good, long look at all of my accumulated media. Except for a handful of DVDs and about a dozen technical books and cookbooks, I really hadn't picked up or used any of the books, DVDs, etc that I owned since I first used them.

At that point, I realized that rule had to apply to everything in my apartment. If I bring anything in (except for food)something else has to leave.

My kindle and iPod have provided a sort of loophole to the system, but I'm still trying to remove something even when I merely download a CD, book or movie. It's just a great practice to have.

Also, when Scott and I moved to St. Maarten, we had to put all of our stuff in a storage unit. We also had to use this same storage unit when we moved across the United States twice. Having to put all of your belongings into a container suddenly puts the importance of "things" in perspective. After getting in our furniture, there wasn't much room left. Clothes, athletic equipment and then kitchen things filled up the last of the space, leaving no room for anything else. 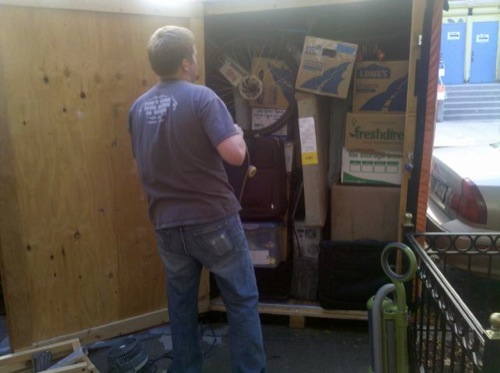 All those books and DVD's I'd accumulated didn't make the cut and found their way to a donation center. It was an "aha" moment for me -- a moment where I realized I really do need to "rent" more than "buy" when possible (i.e. rent the movie rather than buy it) and that if I'm going to bring something in, something else has to go. Otherwise I'll just accumulate too much, and that's not very minimalist.

Do you practice out with the old, in with the new?