Instead of rearranging my closet (next weekend) or taking the minimalist approach to the rest of the house (more future projects) I decided to take 'minimalist' to my virtual life this week.

I have a love-hate relationship with social media. I love the instant personal connection it gives me to others, especially since I am living on an island so far away from everything and everyone, and I love that it gave me the opportunity to build and grow happy herbivore beyond my wildest dreams. But at the same time, I hate that I'm always glued to my twitter stream and Facebook newsfeed. I'm an addict.

Because Happy Herbivore is my life (emotionally, spiritually and financially) and because Happy Herbivore is online, I'm always going to have a relationship with Twitter and Facebook. I mean, sure, I could still write cookbooks without a blog or Facebook page, but it wouldn't be as much fun or "very good for business." It also wouldn't be very good for me because I love interacting with you, my supporters, on a daily basis. You enrich my life and inspire me.

So, I had to find some kind of healthy balance. I had to go minimalist with my social media.

I examined my personal Facebook page first. I was shocked to realize had well over 800 friends.  Did I really know that many people? 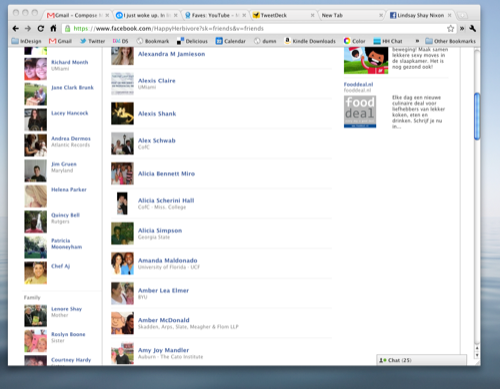 I know there are other authors, etc. on Facebook who have thousands of friends, but since becoming "the happy herbivore" I've been pretty restrictive about adding people to my personal page. It's not that I don't want to be your friend or let you in(I totally do!!)but some of my family members and friends really value their privacy (more on this tomorrow) and since Facebook is always changing privacy and security settings, and the default is to overshare rather than privatize, keeping my personal page...personal seemed like the only solution. Besides, I'm more interactive on my public page anyway.

But back to the 800 friends. I went through my list and opened the profile of every name I did not instantly recognize and checked out our "friendship." (Facebook has a feature called "view friendship" that allows you to see how often you interact with someone). I ended up having over 200 "friends" that I'd never once interacted with. Not once!

Sure having them as a "friend" wasn't 'hurting' me necessarily, but why have them? Just to show I have 800 friends? Is Facebook just another popularity contest? If I'm working to remove the noise and static from my home, and live the minimalist lifestyle, shouldn't I do the same for my virtual life?

Now I have 574 friends, but I actually know each and every person. Some I met online, some I knew from real life, some I talk to very little, some I talk to a lot, but what I've realized is: I want to give all the time I have to the people I actually spend time with.

Interestingly, I was posting updates to Facebook as I was 'purging' and many of my friends got on board and did the same with their pages. It was oddly liberating. I really felt good about it afterward and my friends that joined me said they felt "freer."

I'd say it took about an hour to filter through. I was listening to music the entire time (and I periodically got distracted by photos of cute babies and realizing some friend had gotten married, etc... and then making a mental note to pay better attention) but it didn't take long to purge and like with the pantry reorganization, the little time required was minimal compared to the reward I felt at the end.

Afterward, I moved on to twitter. I was following around 600 people and while that's not a lot compared to some, my twitter stream was updating so fast and so often that I was missing a lot of tweets I didn't want to miss. So I figured I'd go minimalist with Twitter too. 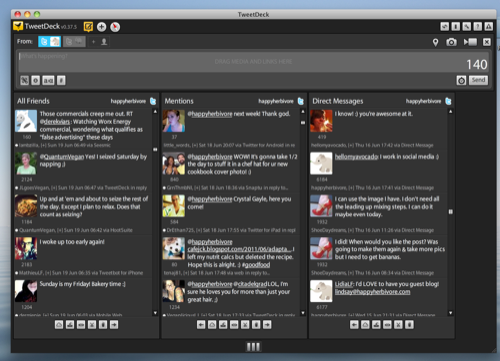 I use Twitter to interact with my supporters and make new friends but its also an information source for me. So, going back to my "I want to give all the time I have to the people I actually spend time with" minimalist principal, I started unfollowing anyone who I didn't recognize from past interaction or I was unsure why I was following them in the first place. (For example, AncientProverbs will probably never interact with me, but I like the random bursts of inspiration).

I haven't finished cleaning through my twitter yet, it's not as easy as Facebook to cycle through, but I'm working on it... and I really feel good about it --I'm limiting my information intake and preventing overload which makes me feel stressed.Minimalist, indeed.

I've also making a commitment to myself to use Facebook and Twitter less, or at least, making sure my updates are useful or interesting or offer something... I don't want to create noise. By the way, if you want me to follow you, just interact with me. I love meeting new people!

UPDATE:After writing this post I stumbled upon ManageFlitter, which allowed me to clean up my twitter in minutes. It's not an end-all-solution, but it's a great start.

Going completely minimalist with my social media is still a work-in-progress, but things are going well. Less is more.