Traveling Herbivore: How I eat Healthy, Low Fat and Vegan in Airports

The world is getting more vegan-friendly, and that's great... I love seeing vegan options on menus, or even dishes that are healthy and can easily be adapted to be vegan, such as asking for fresh avocado instead of grilled chicken on a salad. (Yes, this works!)

After I posted about my hotel room burgers, a few readers asked for more travel tips. Live in airports and hotels? I hear ya! I've done a lot of traveling in the last few years and now I'm gearing up for a mini book tour which means me, and my lovely assistant Andrea, will be eating out of bus terminals, train stations and my backpack.

So, without further ado, here is how you can eat healthy (and vegan!) while traveling. 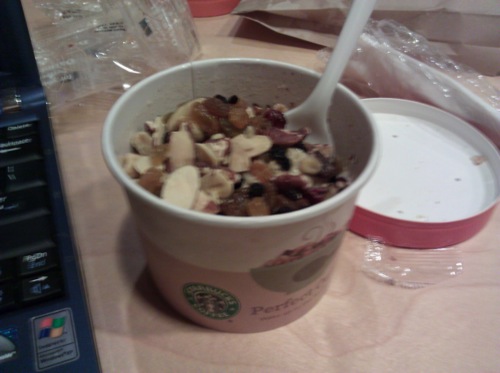 Although not too long ago I could drop $5 on a coffee without batting an eye, I've since become more economical and Starbucks coffees are a thing of the past... though, I've recently rediscovered Starbucks as a source of food — thanks to my friends Gloria & Rob. I always knew Starbucks sold oatmeal, but I had no idea you could make it vegan. All you need to do is tell the cashier you'd like it made with soymilk and voila! (I order the nuts and fruit topping). 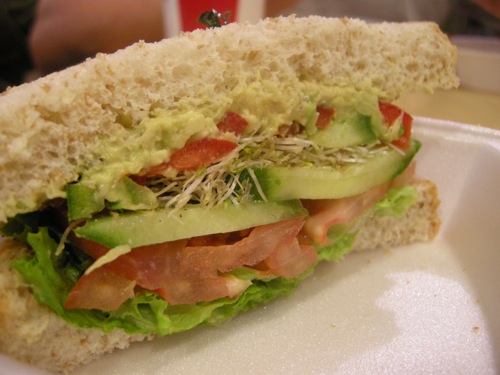 Many of the Seattle's Bests (btw, owned by Starbucks) are offering freshly made-to-order sandwiches and if there isn't a Seattle's Best, there is always some other place that sells fresh sandwiches. If you're lucky, they'll have a vegetarian option on the menu that can be vegan if you hold the mayo and cheese — but I've had huge success just asking the employees to put every veggie they had on some bread with mustard. I've even found that most places have whole wheat these days, and even if they don't have whole wheat, they at least have multi-grain. Cucumbers, carrot slices, tomato, lettuce and dijon mustard? it's heavenly. 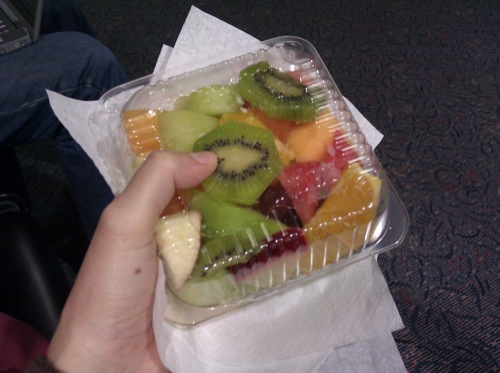 It's January, and I really don't want to think of where this cantaloupe-based "fruit salad" was flown in from, but when you're traveling, some compromises must be made. That includes eating fruit out of season for me, and eating fruit that probably isn't local. Sometimes you can also find bananas and apples; which I prefer, but that wasn't here this day.

I loathe fast food, but sometimes it's my only choice (especially if you're traveling by car in a remote part of the United States) and after spending way too many hours online, I have a list of vegan goodies at seemingly un-vegan chains. I am borrowing a few examples:

Try these choices: bean burritos at Taco Bell (sans cheese), french fries at Wendy's (no cross-contamination), veggie fajitas (sans cheese) at Chipotle, vegetarian burrito (black not pinto beans) at Chipotle (sans cheese and sour cream), Subway, streamliner (veggie burger) at Johnny Rockets (take care to tell them no butter on the bun), veggie pizza on whole-wheat crust (without cheese) Papa Johns, and many more. (Here is a free list online — but not entirely comprehensive, or accurate, from my independent research -- always check and ask before ordering).

Lastly, I also like to bring provisions with me — larabars, (Clif bars for Scott), Justin's PB packets, raisins, instant oatmeal (because you can always find hot water), and homemade sandwiches — which you can see in this picture if you look past the drink: 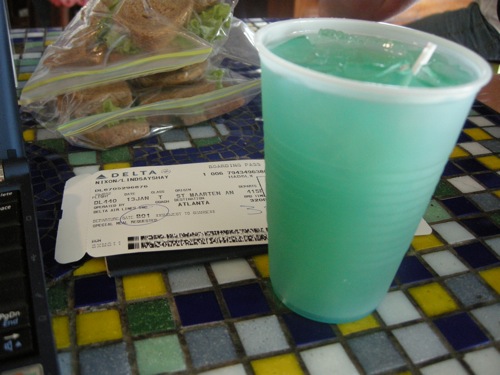 Yeah, I can't believe I drank that glass of blue booze either.