A friend of mine tried to convince me that "potato salad is like meatloaf.... you only like your moms" (and thus, I shouldn't bother trying to make a recipe for my cookbook). I frowned. "That's not really true, is it?" I asked. "Well, have you ever been really happy with any potato salad you ate out? at a deli, I mean?"

He had a point. Sure I'd had some here and there that were alright... but if you asked me, I'd have said my mom's was better (and she used her mom's recipe.)

"I really want to do a healthy fat-free vegan potato salad though" I explained. He shrugged "good luck with that!" 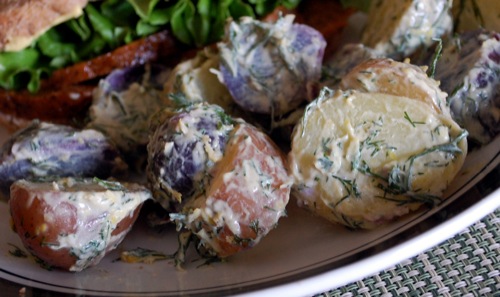 I started first with my grandma's recipe, which as it turns out, didn't translate the way I wanted it to when I made it fat-free and vegan... so I decided to revamp it altogether and just do what made sense to me. The result was a delicious, healthy and highly addictive potato salad.

It's so good that I was convinced I could prove my pal wrong...and what better way to do that then serve it up at my annual family reunion -- where my late grandma's potato salad has reigned supreme longer than I've been alive andmy kin are of the "vegan food? eww...." persuasion?

This potato salad vanished within minutes and everyone couldn't get over how "good" the "new potato salad" was -- and everyone was flat out shocked to learn it was vegan. "Lindsay made this?" *gasp*

Even my mother and her two siblings were amazed.Grandma would be proud. 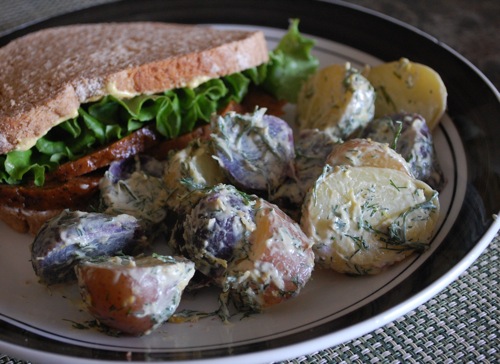 Anyway, the other day I was testing out a vegan "ham" recipe (that's what the sandwich is in the photo) and Scott asked if I could serve my potato salad with it. I thought that was such a bizarre request...seeing as it's January... but considering it feels like June year-round in St. Maarten; I guess it wasn't totally crazy.

Mmm.. the potato salad complimented the "ham" sandwich perfectly and I remembered why it is this salad is so amazing. It's a lesson about how fresh, simple ingredients added up together can equal something divine.

I also heard a delicious rumor that Amazon is shipping all pre-orders, so everyone should have their copy on 1/21---a few days before the actual nationwide release on 1/25. Squee!