After 25 days of food teasing posts, and one very excited post, I've since found out that due to snow and other mishaps, a lot of stores (particularly Borders) won't have my cookbook until 2/1 (or sometime next week). As a result, everyone in the book world is pretty much using 2/1 as my new release date instead of 1/25. Oy vey! 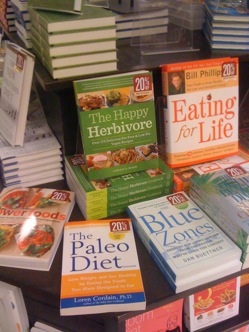 Bummer.So, the short of it: You may not be able to purchase a copy in a store until 2/1. However, you can still order copies online... now.

...and speaking of my book!

Thanks to you, my book is selling like hot cakes! So much so that my publisher has already rushed to a second printing and Amazon is placing "limits" on how many copies any one person can buy! Woohoo!

As a fan graciously explained on HH's Facebook page "It's so hot they have to limit the amount because they're running out and it is now going into a second printing so it will be a couple of weeks before the newest supply goes out! That's exciting news for a cookbook and it's not even a Twilight series! Yay!"

Yay indeed -- all thanks to my hard working Herbies!

By the way, we've been standing tall in the #3 spot on Amazon and last time I checked, we were in the 700's for ALL books. Woah!

So let's keep pushing hard through the week of 2/1 so we can hit all those Best Sellers list!