Today's inspirational interviewee is our youngest starlet yet. At just 15, Bethany changed (and saved!) her own life when she changed her diet. The story of Bethany's strength and dedication to healing herself will surely inspire us all. 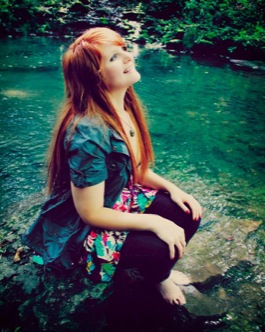 HH: First, the million dollar question: How long have you been vegan?

HH: How did you first hear about veganism? I mean, when I was 12, I was still playing with Barbie dolls. I wasn't exactly tuned in to my diet (though I wish I would have been).

I had always wanted to be vegetarian, but I was uninformed about the health of the subject and afraid of what my country family might think. All I had ever heard about vegetarians was that they were unhealthy and unnatural. Then, through the drama club, I met a girl who was a vegan and she was healthy and happy. She told me it was really easy, and that after a while, you don’t even THINK about eating meat (which is so true!), so, I plunged in. I researched, researched, researched…learning about all the different types of food I could eat, what was considered healthy or unhealthy, and mostly — WEIGHT LOSS.

HH: Did you have a lot of weight to lose? Mind telling us about that?

Yes. I had always been a chubby kid growing up. My parents were divorced, and I lived with my dad. I had no idea what healthy eating really was. Plus, to cope with the pain of not having a mom, I ate my feelings — and ate my way up to 264 lbs (I was 11 years old). 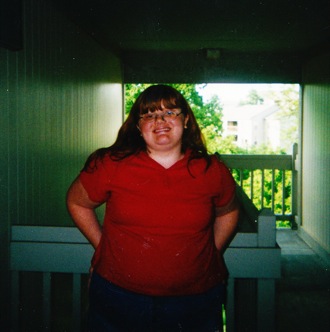 HH: When I was growing up, I was picked on a few times for having a little pudge. Did your size affect your social environment?

I always knew I was bigger then the other kids, and I was constantly sad (I was later diagnosed with chronic depression — when I was 14).

When I got to high school, I gave off the appearance of someone confident, intelligent, and in control. But, inside, I was dying. To cope with the weight of my size (pun!), I became bulimic. It was on and off throughout middle school, but hit hard in high school. My hair fell out, my teeth were always sensitive, and I was just a tragic person.

HH: How did this play into your decision to go vegan? Were you motivated by your health?

My main goal wasn't health, it was losing weight. And weight I lost. In the first 10 months, I had lost 60 lbs, and was down to 200 for the first time in my life. I was so happy! I felt great, and my bulimia had subsided. Then, I hit a plateau. The weight just couldn’t seem to budge. I felt stuck and upset, and I started to obsess and began the binge-purge-fast cycle. I then became a raw vegan (only for weight loss, not health), and plummeted down to 130 lbs. But, like with any "diet," I eventually gained it back.

HH: What about now, are you still battling weight loss and bulimia?

I weigh 175 lbs now…and I am surprisingly happy. Back then, I ONLY wanted to lose weight, I neglected my health. I stopped loving myself, and I stopped listening to my body’s signals. When I gained back some of the weight I had lost, I freaked out, but then, slowly, I came to the realization: I am beautiful. I have lost  so much weight, so much pain, I am a whole new person. And, I deserve the best life.

Yoga has also really helped me come to this peace of mind, as does long walks and light jogging, I feel lighter, happier, and more in tune to the Earth.

HH: That is incredible and youarebeautiful. How has this new mindset shaped your veganism?

This past year I have been focused more on being and eating HEALTHY. And, that is my advice for anyone who wants to go vegan — love yourself, accept yourself first! Focus on your HEALTH and your overall being, and weight loss will follow. If you don’t love yourself now, you won’t love yourself 30 lbs from now (I HATED myself at 130 — I thought I was still FAT).

I primarily eat a low fat plant-based vegan diet (like Eat to Live/McDougall style), and even though sometimes I still think I eat too much, I remind myself that it’s just plants.

HH: In addition to weight loss and developing healthier attitudes about food and body image, have you experienced any other benefits since going vegan?

After going vegan, I didn’t have to wear braces for my ankles anymore, my skin cleared up a ten-fold (I used to be acne city), and now, I have the best conversation starter ever! Some of my favorite convos have been about my eating habits. =D

HH: A lot of people view veganism as a lifestyle and not just a diet or dietary choice. Was weight loss your only motivation for going vegan?

No, other things that  made me go vegan were animal rights. I am still baffled why anyone would want to eat a sentient being, something with a family, babies, a SOUL. PETA videos, Skinny Bitch,  Eating Animals by Jonathan Safran Foer, and Earthlings contributed heavily to my final decision to go vegan.

HH: You've had one helluva experience at such a young age. What have you taken away from it?

Ultimately, what really helped me go vegan, lose weight and defeat bulimia (I haven't purged in 8 months!) was LOVE. Love for animals, the earth, and most importantly, MYSELF.