Last time we talked to Kate about how she defeated her debilitating condition by diet alone (even when her doctors put no credence in the vegan diet as a cure!).  Now she's back to talk to us about vegan mommyhood, dating as a single vegan and making mixed-diet families work. 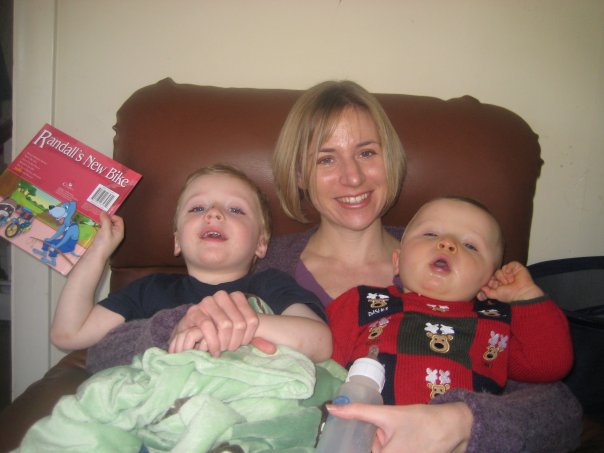 HH: You are a mom to two adorable vegan boys. Tell us about them.

Kate: My boys are 4 1/2 and 2 3/4 right now. They have both been raised vegan since birth. My boys are smart, active and happy, just like any other kids. Both boys are huge for their age - in the 90th percentile for height and weight (although they are not fat, just solid).

Have you noticed any differences between your boys and their peers?

I would say my boys are pretty typical for their ages. Perhaps they have more energy (which is not necessarily an asset at times!). I think my oldest has a little more muscle mass, and less fat on his body than his peers, but that also has to do with the fact that neither boy watches TV. My younger son is still stocky - he is transitioning from a toddler to a little boy.

What do you do about social situations and daycare?

I bring food and snacks from home to their daycare. I was concerned that they would feel socially awkward because they had to eat different foods, but a lot of kids these days have special diets due to allergies.

How do you talk to them about veganism? Any good books?

They are aware that we are vegan, and that most people are not. William (the eldest) asks me all the time about who eats cows, and why. He likes to point to the meat in the grocery store and ask me about it. I talk to them both about the fact that I think eating meat isn't the healthiest choice, and how we like the animals and don't want to hurt them for our food. When Will was smaller, his favorite excuse for not eating something was that "it had cow in it." But I try to stress that everyone is different, and that other people make choices for themselves and their kids. All parents try their best.

As for books, my favorite is Herb the Vegetarian Dragon. There is one book we have called And That's Why We Don't Eat Meatwhich goes into the horror of factory farming, but I think it is upsetting for little kids so I don't read it to them.

What are some of the boys' favorite vegan dishes?

I would say the most popular meal at my house is risotto. They also love pasta and pizza (thank God for daiya!). We eat tofu scramble fairly frequently, polenta, etc. Actually, one of their favorite treats is getting Indian food. Will absolutely loves salads and will try almost anything. My younger son is just starting to come out of the stage where he refuses to eat anything that looked funny - which, to a 2 yr old is everything but bread and bananas. Their diet isn't as varied as I'd like it to be, but I am working on reintroducing things like lentils that used to be staples.

In the first part of this interview, we learned that your doctors were not (and still aren't!) supportive of your vegan diet. What about the boys' pediatrician?

Their pediatrician is supportive -- he has seen them grow and prosper. Unlike my doctors, the boys' pediatrician has always been completely open minded and accepting.

What about the boys' father? Is he supportive?

My ex-husband is also vegan. He feels much better being a vegan than he ever did eating a traditional diet. Like me, he too believes it is the best diet for our boys.. which is saying something. His mom's favorite cook is Paula Dean so you can imagine the food my ex-husband grew up on!

You're also single, or well you were -- until you met your wonderful boyfriend. Many single vegans are unsure how to bring their veganism up or if they they should even bother dating a non-vegan. Any advice?

Don't jinx my relationship Lindsay! No, seriously, when my ex-husband and I split, I started dating again. I didn't focus on dietary choices as a major criteria. It is much more important to me that a partner is smart, kind and has a good sense of humor than what he feed himself. That being said, when I joined match.com I put "vegan" in my profile to let people who could not deal with that weed themselves out.

What about your boyfriend. Is he vegan?

I remember my first date with Chris (hard to believe it was almost a year ago!). He is allergic to wheat and joked that there was no way he could be vegan because the overlap between our diets was almost non-existant. (FYI, Chris and Kate both follow a gluten-free/wheat-free vegan diet now).

Chris didn't eat a lot of meat, but he loved cheese. When I started cooking for him, his eyes opened to the possibilities of food beyond meat and cheese. The variety in his diet went up considerably. He is also a good cook in his own right, so he would prepare dishes similar to what I served on nights we weren't together.

Three weeks after we started dating, he went vegan on his own accord. He says he feels a lot better being vegan - and that is the motivation for his choice. He also likes the freedom to eat until he is full without worrying about gaining weight. His mom also has Type II diabetes, so he encourages her to incorporate vegan meals into her diet.

You also dated other non-vegans who, unlike Chris, did not adopt a vegan diet. Any advice for people finding themselves dating an omnivore or vegetarian?

I think a vegan and a non-vegan can be happy together as long as they treat each other with love and respect, but it is not easy. I believe in a live and let live attitude - I am confident in my decision to be vegan, and I don't judge other people for their own choices. That being said, I don't think I would like meat in my house.

This is a tricky issue for me because while Chris is vegan, his kids (ages 14, 12 and 9) are not. If at some point we want to live together, we are going to have to figure out what our household is going to look like. I don't think he would be comfortable limiting his kids to only vegan fare.