I woke up at 7:30 a.m. so ravenous it hurt. All I could think about was getting a big ol' whole wheat bagel with vegan cream cheese. Still, I dragged my rear to the kitchen where I had whole oat groats soaking overnight.

For breakfast I made whole oatmeal from Raw Foods Made Easy by Jennifer Cornbleet. One of my tweeps doing raw week with me had "raw oatmeal" yesterday and I just had to see what it was all about. (I also admit I was a little skeptical, I mean, how on Earth is waterlogged, uncooked oats palatable?) 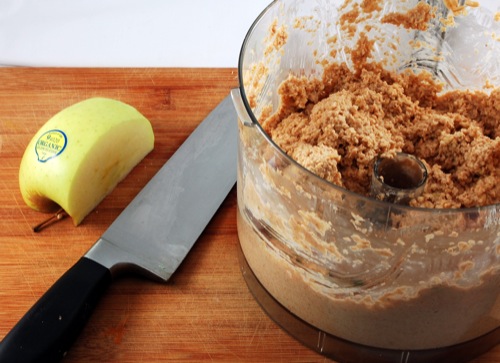 To my total surprise, this dish is phenomenal. I dare say I like this "raw oatmeal" better than traditional oatmeal or even steel cut oats. It yields a total of 2 cups (1 cup is pictured) but even as hungry as I was, I was unable to finish my entire bowl. (I had about 1/3 cup leftover). It was mighty filling! 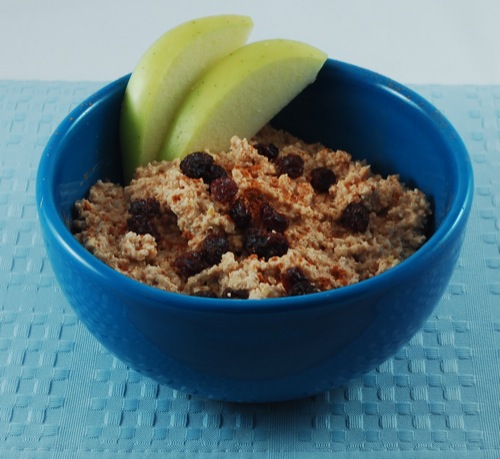 Around 12:15 I noticed I still wasn't hungry for lunch. It seemed odd to me, but I figured I'd let my body tell me when it was good and ready to eat again.

I finally felt a little hungry at 1:15, but still no true hunger. I noticed I was having difficulty concentrating at work, however, so I decided to eat a gorilla salad(that bowl is huge, don't let the picture deceive you!). 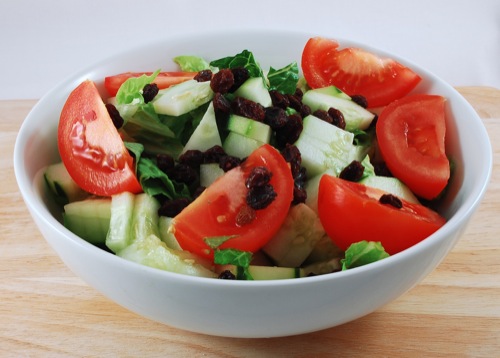 I chopped up 2 romaine hearts, 1 giant cucumber, 1 tomato and added 1/4 cup raisins. For the dressing I mixed freshly squeezed lime juice with a dash of chili powder and a few drops of raw agave nectar. I normally like to use balsamic vinegar, chalula (hot sauce) or vegan bbq sauce for my dressing, but none of them are raw.

By 2:00 I was still having a hard time concentrating, so I ate a very small potato I'd gently steamed a few days ago with a splash of nama shoyu and a bit of black pepper. Not raw, obviously, but I knew, intuitively, I needed slow-digesting carbohydrates to regain my mental alertness. (Plus I figured 90% raw is still doin' pretty good!)

Around 3:00 I had a few slices of dehydrated mango that I picked up from Trader Joes. I wasn't particularly hungry, but I was in the mood for something sweet and worried about my overall caloric intake.

For dinner I planned to make spicy carrot soup in my Vita-Mix, but around 4:30 I learned my favorite brewery, MagicHat, was having an event at a bar Scott & my friend Genevieve like. Genevieve was also on the Rachel Ray Show yesterday and that warranted a small celebration, no? I figured the bar would at least have a salad on the menu, right?

The whole subway ride there I debated with myself on whether I would or would not have a beer. Beer isn't raw, obviously, and I'd already had one "cooked" food today. Sure I suppose I could go a week without one beer (but did I really want to?). The answer was "no" and I stopped trying to justify it with myself.

About an hour later I felt woozey, if not shit-faced drunk. I hadn't even finished the beer I ordered, so how was this possible!? I told Scott what was going on and he suggested "I needed to eat something." I concurred and grabbed a menu. The only "vegan" options were hummus, chips and salsa or french fries (I was at a bar, I didn't expect much... but I'd hoped for a salad). I figured the chips and salsa was about as raw as I was going to get and something was better than nothing. I didn't feel better. Then Scott ordered some of the fries, and I snatched a few, but still I was feeling flat-out intoxicated and wanted to go home.

I had two giant glasses of water and went to bed. I was unable to sleep all night. I tossed and turned for hours. I "woke up" feeling lousy, too. Maybe it was the beer. Maybe it was the raw regimen. Maybe I just had too few calories yesterday. I'm assuming its a combination of all of the above.

I suppose I could have stayed home and kept to my plan, and avoided the downward spiral that was last night, but part of this week's experience is to answer the question "can this diet fit my lifestyle?" and holing up in my apartment for a week wouldn't really give me a true perspective.

Still, I'm not defeated, even if I flunked out yesterday. I'm eating a banana and hoping for a raw day 3!