Posted by:Lindsay S. Nixon
I've seen the Vcon Seiten Piccata recipe on so many blogs. It sounded great, but despite the notation in the cookbook proclaiming it was easy to make, I knew it would be too labor intensive for a weeknight meal. I emailed a bunch of fellow foodies looking for a review and no one had made it. Still, I thought I'd give it a whirl... I just had to wait for the weekend. 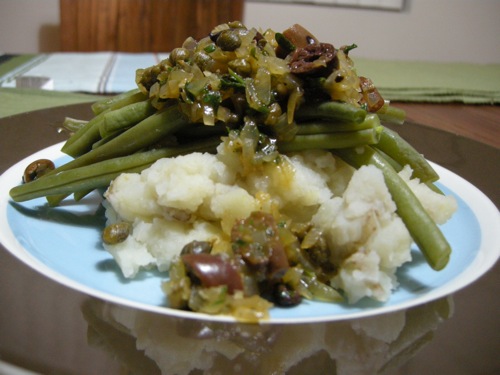 Disclaimer: I'm not a seiten person and the two times I've tried to make "homemade" well, it went very badly. I opted to buy Tidal Wave's Seiten at the grocery store instead. I'm not sure if it was my pot, the seiten or the fact that I was using whole wheat pastry flour instead of all purpose (I don't keep that in the house - ever), but the seiten came out a nasty, smelly, burnt mess. So that's where the idea for chickpeas came from. I followed the rest of the recipe exactly though (except that I sauted my shallots & garlic in broth instead of oil) and used my recipe for creamy fat free mashed potatoes. I thought this recipe, despite the cooking woes, presented beautifully and since I love anything with capers and olives - I was a happy girl. Scott, however, didn't like it but he couldn't put his finger on which ingredient it was he didn't like. Blech.